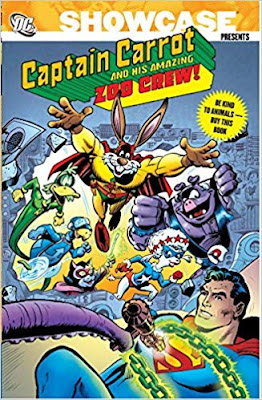 
This collects all twenty issues of the last “funny animal” comic ever produced by DC comics in the 1980s. For those who are unaware of the genre here is the definition from the great late Don Marksten’s Toonopedia - “ A genre of fiction which, like superheroes, is found more often in comics and animation than elsewhere, and which is characterized by animals that walk and talk just like humans. Many aficionados of the genre insist that a funny animal no more has to be "funny" than a comic book must be "comic", citing Bucky O'Hare and Teenage Mutant Ninja Turtles, but others disagree. Many of the best funny animals, such as Uncle Scrooge, combine humor with adventure in about equal measure; but some, like Usagi Yojimbo, while not totally eschewing humor, place more emphasis on the dramatic aspects of their stories. And then, of course, there are Pogo, Bugs Bunny and suchlike, that are almost all humor. A surprisingly broad and varied category.” 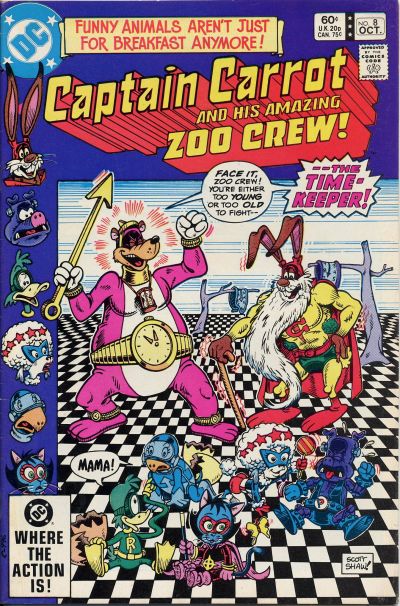 Essentially the comic is just another superhero story, albeit told very tongue-in-cheek, with anthropomorphic animals in place of humans. After Superman knocks a strangely glowing meteorite into another dimension, it breaks into five pieces and bestows superpowers on five random animals. There is the titular Captain Carrot, Pig Iron, Rubberduck, Fastback (a turtle variant on the Flash), Yankee Poodle, who can shoot from her hands attraction and repellents beams in the forms of stars and stripes, and Alley Cat Abra, the mystical feline. Together they have some standard and mediocre adventures.
The material is clever, but not laugh-out-loud funny, and it became a little draining, reading twenty issues in a row of bad animal puns: San FROGcisco, Gnu York, President Mallard Fillmore, and so on. Normally I would never say this, but I think the absence of color in the Showcase Presents volume detracts from the comic. Something about the funny animal art lends itself to color. 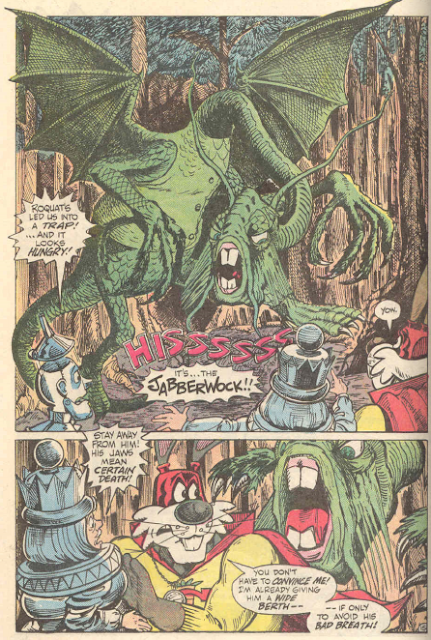 Along with the twenty issue run is a three part double sized limited series-which was always intended to be the next arc in the Captain Carrot run, called The Oz-Wonderland War. In this, the Zoo crew actually go to OZ, via Wonderland, to defeat the Nome King and restore Ozma to the throne of Oz. While this story has been right criticized as being way too similar to the L. Frank Baum book, Ozma of Oz, the art in both the Wonderland and Oz sections are dead-on recreations of illustrations in the original books. I think for this reason alone, the Oz-Wonderland War is the best in the book.
Captain Carrot was an attempt to capitalize on the massive popularity of the Teenage Mutant Ninja Turtles and to also reassert the copyright claims on some of DCs oldest funny animal properties. This is similar to what marvel did with Peter Porker, The Spectacular Spider-Ham. Nearly all of D.C.’s old characters from the 40s and 50s make an appearance- Dodo and the Frog, The Terrific Whatsit, Hoppy the Captain Marvel Bunny (the first superhero funny animal), the Three Mouseketeers (a term ripped off by Disney), Peter Porkchops, McSnurtle the Turtle, & Nero Wolf. If you haven't heard of any of them you aren’t alone, they are names recognizable only to aficionados of the obscure.
There have been some modern updates to the Zoo Crew in The Final Arc, plus appearances in Countdown and Final Crisis events. But their appearances have been fleeting and those stories are not included in this volume. 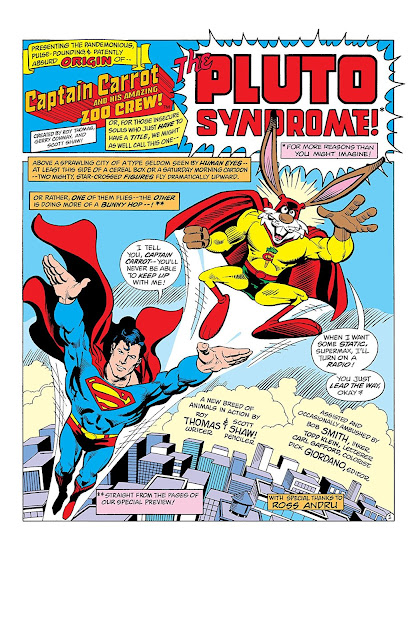 For more readings, try books by Rex Hurst.
Posted by RexHurst at 12:05 PM