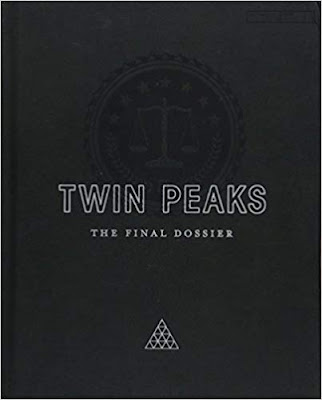 
“It’s right there on the front page: Laura Palmer did not die. So, fairly certain I’ve not misplaced my own mind, I go back and check the corresponding police records. They tell me this: Laura Palmer disappeared from Twin Peaks without a trace - on the very same night when, in the world we thought we knew, it used to be said she died-  but the police never found the girl or, if she had been killed elsewhere, her body or made a single arrest. In every subsequent mention in an edition of the Post, the case is still listed as an open and pending investigation.”


Thus ends the last chapter of the Twin Peaks file. I did say spoilers in the description right? If not, I meant to. Yes, this baffling end where the whole of Twin Peaks seems to become wrapped in a time\space fractal and rewrites history is the true conclusion of the story. This directly relates to Cooper and Diane entering the alternate world constructed (or dreamed) by Judy (or Joudy as the book names her- a rouge demon called “the mother of evils”). This also plays into a scene in the last episode of the original series, where in the Waiting Room the doppelganger of Leland Palmer appears before Cooper and states that he didn’t kill anyone.


We know that events in the Waiting Room, the Black Lodge, and presumably the White Lodge can re-write time. This is one of the speculations as to what is happening in Fire Walk With Me, that time has been rewritten to allow BOB to steal the garmanbozia (pain and sorrow) from Laura. This is due apparently to her putting on the jade owl glyph ring.

As to the exact nature of Laura Palmer, that is up in the air. We know her mother was in the area around the time of the Trinity atom bomb testing, which opened the door for the entities to invade the world, now known as the Roswell incident.  It is indicated that Laura Palmer’s life was intended as a trap to suck back in all those rouge spirits affiliated with Joudy, which is why so many spirits (or whatever) were attracted to her. This ultimate plan of the Fireman was subverted by BOB killing her, caused by her putting on the jade ring. She was supposed to disappear into the other dimensions around the Waiting Room and the Black Lodge. When Laura Palmer fulfilled her purpose, the world changed.


This plays into an underscored theme of the series, the nature of enlightenment. Throughout the series there have been several characters on the verge of grasping enlightenment, only to be prevented at the last minute by (what the book calls) “the Watcher on the Threshold”, a thing manifesting as the last threat for the person to overcome and it often results in failure. Three characters, Major Briggs, Phillip Jeffries, and Dale Cooper all come to the point of greater understanding - only to fail.

Apart from clarifying the ends of several characters who don’t appear in the series, or have very limited roles, the book itself adds little to the series. It mostly categorizes the action of The Return as would be discerned from the point of view of the FBI. No mention of Dougie or the gangsters from Vegas. As much of the material is garbled in and spread out, it puts things in linear order for easier digestion.


The most interesting speculation that I’ve seen here on the nature of the characters is that BOB didn’t possess Cooper, but the Cooper Doppelganger (which makes sense, considering the last scene of the original series) and is revived by the Woodsmen, after the Doppelganger is shot. I think had not the original actor of BOB, Frank Silva, died in 1995, the story would have gone much differently. In fact that was the biggest problem I had with the series, so many people who played characters from the Black Lodge had died off that the place felt empty.
For more readings, try books by Rex Hurst. 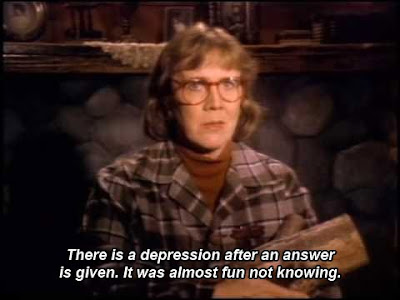