The Burning of the World: A Memoir of 1914 (History) (Autobiography) 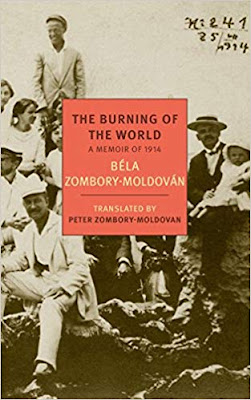 
‘What are you up to, Drafi?’
He was about to jump to his feet to report, when the mate spoke up.
‘Sir, he’s found a potato. He wants to plant it in the ground.’
‘It’s got such good shoots. It wants to live. I’m going to plant it. It might live longer than me.’
Poor Drafi.
The potato did indeed outlive Drummer Janos Drafi of the Royal Hungarian Army.”
A brief moment of time with deals with the immediacy of death in World War I, though the author did not realize it at the time. In fact, in 1914 every side assumed the whole thing would be over in a few months with their glorious nation as the absolute victors. With hindsight, we all know that to be nonsense. The tactics of the time, somewhat left over from the 18th century, could not overcome advancements in technology. The machine gun overruled everything.
We see that idiocy in certain parts of the narrative. Hungarian soldiers were ordered by their generals not to dig foxholes to hide from incoming shell fire, because it “smacked of cowardice” and would destroy the discipline of the men. After a General is killed by a direct shell hit, it seems that the order was hastily reversed, but not enough entrenching tools were issued. The author recounts having to hastily dig a foxhole with the top of a biscuit tin. During this campaign, 80 percent of Hungarian officers were killed.

While firsthand accounts of life at the front of World War I (or the Great War as they called it at the time) are somewhat commonplace, ones about the Galician campaign are rare. In the course of the battle, the Austro-Hungarian armies were severely defeated and forced out of Galicia, while the Russians captured Lemberg and, for approximately nine months, ruled Eastern Galicia until their later defeat.
This was meant to be an autobiography covering the author’s entire life, but only the part dealing with 1914 was ever finished. The author died in the late 1940s when communism had claimed Hungary. The author, an artist, was ousted from having his work ever displayed again and retreated into solitude to paint by himself and write this unfinished memoir. It was finally published in 2014- one hundred years after the events of this book take place.

However the actual events of battle is only covered in one chapter of the book, accounting for a total of 21 pages, where he suffers a near fatal head wound and spends the rest of the year recovering. The following six chapters show him traveling about the country, noting how even at the beginning of the war thing had notably changed, mostly for the worst.


For more readings, try books by Rex Hurst.
Posted by RexHurst at 7:43 AM