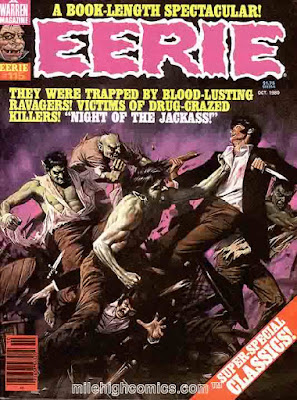 Normally I don’t cover individual issues of a magazine but this one is special. For those who read my review of The Rook Archives I mentioned that the best recurring story in the history of Eerie magazine was “Night of the Jackass!” and hoped they would eventually put out a hardcover graphic novel collecting all of the stories. While there was apparently a version released in 2009 in the UK (at least it is listed on Amazon UK), copies are seemingly non-existent. So in my random pursuit of the book, I came across the knowledge that Eerie had reprinted the entire four story series in issue 115. I jumped onto ebay and procured one forthwith- And let’s have a round of applause for ebay, my collection of obscure books would be vastly incomplete without it.


“Night of the Jackass” is one of the most disturbing stories that Warren Publications ever put out. By the time these were being produced, they had long run out of vampire, werewolf, and zombie tales, and were groping along looking for something different. This was one of them, the best of them. It does not hold back in its depiction of murder of children, rape, or violence. These are not “safe” stories. Nor does the arc end happily. 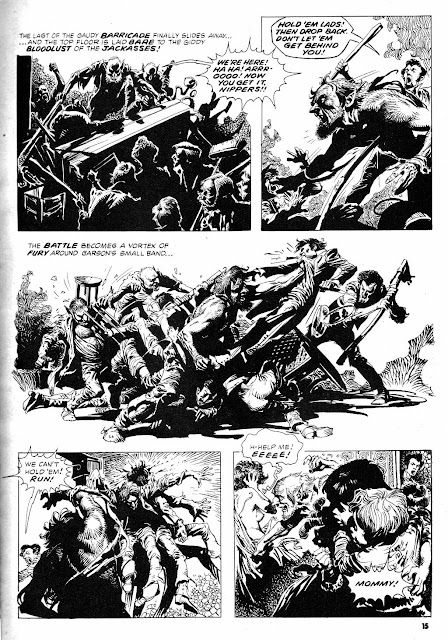 Set in the late Industrial Revolution of the 19th Century, a drug Hyde-25 has gotten loose in capitals of Europe. After a wrist is slashed and the drug applied, a person is transformed into a slathering bestial version of themselves. A walking Id with superior strength and the appetite of the most deranged rapist. The catch is that after the drug wears off, the imbiber dies. The type of person who “jackasses” are from the bottom rung of society - drifters, bottomed out alkies, terminally ill, the castaways of society. The backdrop of industrial decay plays perfectly with this bleak scenario- human wreckage being one of its bumper crops.
Into this comes our two vengeance filled heroes. The first is Samuel Gibson, a middle class Londoner, whose wife is killed on their honeymoon after a group of jackasses take over the hotel they are visiting. His aim is to stop the horror from spreading. Clause Bishop, a depressed, Welsh coal miner, who checks into that same hotel with the idea of suicide, but finds a reason for living in destroying those who jackass. He is the most complex character because he battles the jackasses for the same reason they use the drug in the first place. Later, they are joined by Mme. Berthe Astruc who accidentally created the formula for Hyde 25 and is hastily attempting develop a cure. 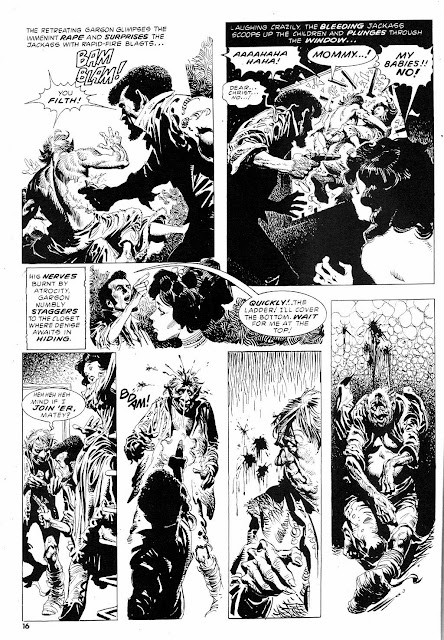 Among the various themes running about these stories, the most interesting is that of society sowing the seeds of its own damnation. While the science of the Victorian age is tearing itself apart, the police do little to counter it. Their standard action when a jackassing occurs is to seal off the building and let it burn itself out, damning the innocents inside to be raped and murdered. The ones who commit the deeds were placed in a position where a murder/suicide romp was a pleasant thought by the same society they desecrated.


In the final story, after pages and pages of death and sexual assault, a cure is found, but this does not wash away the horror that has happened. None of the characters has a sense of relief only more dread. That’s because the cure is not an antidote, but a weapon to use against the jackasses. All of them took the drug knowing what the effects would be. Thus the nightmare was not truly over.


Which is why I felt there could easily have been more Jackass stories. They never touched into who was manufacturing the drug and its distribution method. This sort of thing doesn’t just “appear”, someone had to be profiting. A few more stories, two or three, could easily have been added to the lore. Not that they would have really been able to top the first three stories in terms of brutality or shock, so perhaps it was just as well that they left it as is. 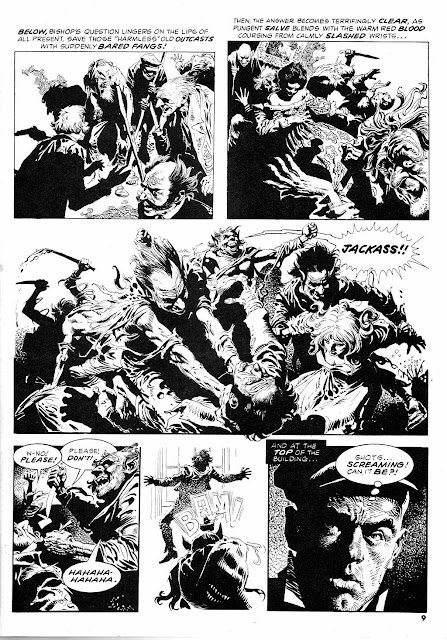 Along with these stories is an additional tale, called “Excerpts From the Year Five”. While it is not part of the Jackass series, the tone of hopelessness and survival are congruent with the other stories. It was written by the immortal Budd Lewis who is responsible for some of horror comic’s greatest tales, and also illustrated by Jose Ortiz- an illustrator that is chronically under recognized. “Year Five” shows the journey of one man as he struggles to survive physically and mentally after the world’s fossil fuel supply runs out. Grim and gritty. Nothing more needs to be said.


I also have to comment here on the advertisements in the magazine. It didn’t seem strange when I was younger, but while the content is geared more for adults, the advertisers all assumed it was kids who read the magazines, as it is riddled with ads for toys, fantasy books, and model kits. Dominating the toys were the science fiction giants of the day Star Wars (Empire Strikes Back had just been released a month before), Battlestar Galactica, Close Encounters of the Third Kind, Star Trek, and Alien. Actually, most of those franchises still dominate the market. I guess there really are no new ideas.


Nostalgia gripped me and I spent a pleasant half hour looking through all of the ads, picking out which ones I had (and subsequently destroyed) and, more importantly, the ones I did not have and regretted it. An old grasping nature crawled up in me and I yearned to go back in time and pick up the Star Wars Droid Factory, or Darth Vader’s Star Destroyer, or the Y-Wing Fighter. Ah well.