by Brendan Lehane & The Editors of Time Life Books

“In that uncertain age, it mattered that the question of the champion’s precedence have an answer. It was not only for the honor of the thing that the Ulsterman named champions. So long as the question of valor remained open, there was division and quarrelling in the king’s hall, and Ulster stayed weak from squabbling with itself. No one disputed the king’s authority -kings were born with that - but standing alongside the king there had to be his champion, his hero. If the king symbolized the land itself and all of its people, his heroic champion stood for their warrior spirit and fought for them in battle. The hierarchy of bravery had to be established and acknowledged as well as the hierarchy of state. A tribe without a hero was a piteous and vulnerable thing.”

While legends of old had no end of stories from every culture, obviously a decent sampling of them all would require more pages than this series allows, and often would be quite repetitive - as one story pops up in another culture with a similar theme but a different protagonist. To prevent that the authors of this book decided to limit it to tales of the Ulster Cycle, which take up the first two chapters. While chapters three and four take on the Matter of Britain and the legends of King Arthur. 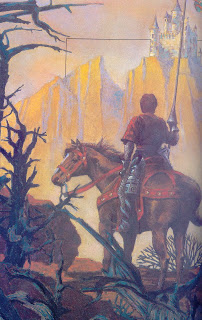 Chapter 1 - “Lords of the Chariot and the Spear” - While this chapter sounds as if it limits itself to Greek and Roman heroes, we must remember that the chariot was almost a universal travel device in the ancient world - until the development of the saddle.  Here we learn of Cuchulain and the Red Branch Knights out of Ireland. Many stories of his bravery and skill are presented here, which inevitably leads to Chapter 2 - “The Cruel Demands of Honor” which tells of his death and the betrayal of all the Red Branch Knights and their eventual fading from the world. For every good collection of stories needs a tragic ending - or perhaps any ending in and of itself is by nature tragic.

Chapter 3 - “Brotherhood of the Round Table” begins the Matter of Britain and the foundation of the Knights of the Round Table. It discusses, mostly in general terms the beginnings of Arthur’s reign and the reformation of what makes a knight, especially the chivalric ideas prevalent in Camelot. The knight is meant to be fair and true, help those in distress, and always offer mercy when it is requested.

Chapter 4 - “The Noblest Quest of All” - deals exclusively with the story of the Grail. Described as the “last of the great quests”. It deftly weaves together all the various tales about the Grail, finished and half-finished, into one near-definitive tale. From beginning to end, the only difference is that the story refuses to state exactly what the Grail is. While the narrative mentions the Christian interpretation of it containing the cup of Christ - which is probably not what Chrétien de Troyes, the man who invented the story of the Grail, had in mind. The story states that the device of an ever-flowing container which could heal and feed the world was not knew in mythology, nor was the idea of a deadly spear as is seen in the tale of the Fisher King. Whatever view the reader might take, the conclusion of the Quest for the Holy Grail marks the end of the high point of life in Camelot. 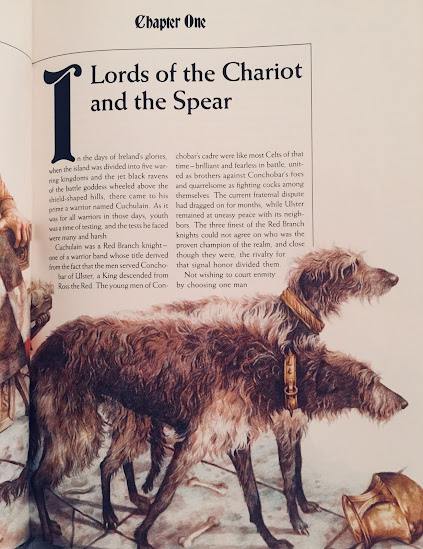