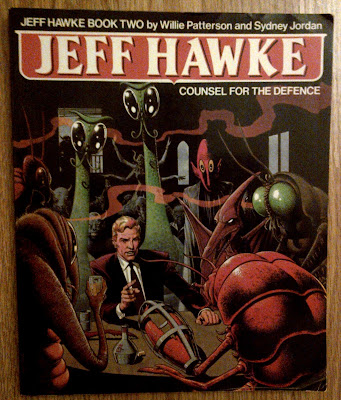 Other sellers of this volume are more reasonable. Starting at 3.99.


Much of the background for this science fiction adventure strip is included in my previous review of Jeff Hawke: Overlord. So in brief, Jeff Hawke ran for nineteen years beginning in February of 1955 and ending in April, 1974. While English in origin, the strip found its most ardent fans in other countries. And there is still is an ardent, albeit older, base of fans who keep parts of it alive on the internet. You can see it on this laughably old fashioned fan site. While the fanzine on it may be real, it doesn’t look like it’s been updated in over a decade. But the site is selling original art from the series, so it may be legit.


This particular book contains three stories of the Jeff Hawke strip, from its golden age if you ask superfans. The first is Counsel for the Defense wherein Jeff and his associate Mac are hauled off planet by alien police to act as the attorney for Chalcedon, a recurring villain in the series. Things go south, violence and hilarity ensue. Second is Pastmaster, where a figure from the far future appears in Hawke’s time (the future age of 1989) to bring a moonbase and its technology to primitive man and allow humans to technologically accelerate at an incredibly fast pace. This story is unique in its odd depiction of time travel. Last is Immortal Toys, a sort of ancient alien story with an interesting twist. A number of high technological devices are found in the ruins of ancient India and Jeff tries to track their source. 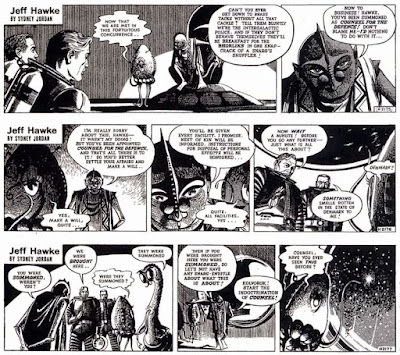 I will saw this, as the original writer pointed out ad nauseum, Jeff Hawke was ahead of its time. Many concepts which are common today first appeared in the strip. Which is why one says that the series was influential, if not popular. Counsel for the Defense introduces the idea of skill implants, as Jeff has a device implanted in his brain which gives him access to the Galactic law library. The ancient alien idea was a fairly new concept when this strip first appeared in 1966.


I have to say that this volume is not a continuation of the previous one, in fact the lead story Counsel for the Defense appears in Overlord, but the presentation in this volume is far superior. It’s softcover, as opposed to overlord’s hardcover, but each strip is larger and allows the reader to absorb the action and dialogue much quicker, allowing for a more enjoyable read. 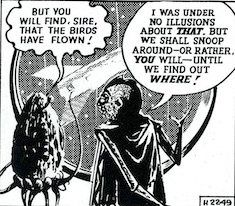