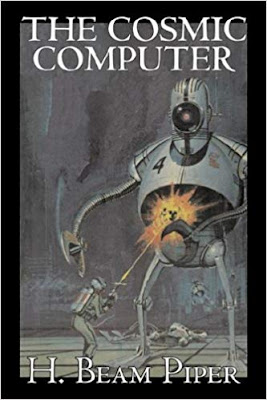 
“Conn would have like to stay outside; he could not. Too many things were happening in too many places, and it was all coming in by screen. Rioting had broken out in Storisende and in a dozen other places. He saw, on a newsscreen, a mob raging in front of the Executive Palace; yellow-shirted Cybernarchists were battling with city police and Planetary troops, Armageddonists, and Human Supremacy Leaguers were fighting both and one another. Above all the confused noise of shouting and shooting, an amplified was braying: ‘It’s a lie! It’s a lie! Merlin has been found!’”
This is a further book set in H. Beam Piper’s Terro-Human Future History where humanity colonized the stars. It has been expanded from his short story “Junkyard Planet” which was published in the Federation book of Piper’s short pieces. It is 40 years after a massive civil war, called the System-States War, on a planet Poictesme which had been used as a forward planning and attack position for the Federation forces. As a result, the planet is littered with leftover military installations and equipment. The planet is suffering from an economic depression.

The main character has been tasked to learn the location of the rumored supercomputer, known as Merlin, which won the war for Federation and whose existence is denied by everyone involved, except the hardliners on the planet who feel that it will be the solution to all of their problem. The protagonist sees an opportunity to trick the people of Poictesme into bettering themselves while pretending to search for the computer. Things go wrong and the hunt for Merlin becomes political, then quasi-religious, and ends with something violent and wonderful.
Often Piper’s stories are described as workmanlike- derisively so- because he approaches the subject of colonization of space in the same manner the men of old took to colonization of parts of Earth: Exploration for profit, control of resources, and the need for intense practicality while doing so. This is not a world cosmic weirdness and wonder, but about practical men surviving and thriving through their own guts and ingenuity. 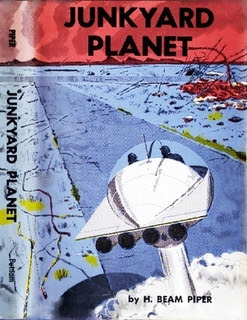 For me half the fun of reading these old sci-fi stories is picking out the anachronisms or “future technology” that we have already surpassed in the current century. There are surprisingly few in this book. The biggest one is that the computers are described as large and they plus the robots are fed their instructions through magnetic tape, which was state of the art material in the 1950s when this story was written. I got a few chuckled out of that. The only other ridiculousness is the means of contragravity which gave men flight through the stars and hover technology is a metal plating substance called collaspium. The specifics are not gone into, but it seems a constant effect, which begs the question- how do they ever land the ships?
While you can buy the hardcover copy above, this book is also available for free from Project Guttenburg.
Copy of Project Guttenburg’s books- https://www.gutenberg.org/ebooks/author/8301
For more readings, try books by Rex Hurst.
Posted by RexHurst at 9:50 AM