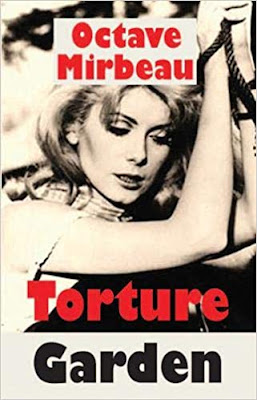 
“Come, dear ones, come more quickly. Where you’re going there is even more pain, more torture, more blood flowing and dripping to the ground, more contorted and torn bodies at their last gasp on iron tables, more cut open flesh swaying from the gallow’s rope, more horror and more hell. Come, my loves, come, with lips together and hand in hand. Look among the leaves and the latticework, look at the infernal diorama as it unfolds and at the diabolical festival of death.”
This work has been compared to that of the Marquis De Sade, having read all of De Sade’s writings I can assure you that it is not. It is De Sade light and much better written than most of De Sade’s tales. However several of the themes of the Marquis’ work are present in this twisted tale. In the wake of the Dreyfus affair, much of French literature turned to discussing the hypocrisy of Western civilization. About how many decry acts which they themselves regularly perform. About how the worst always crawl to the top, but must maintain airs of absolute respectability.
However, while De Sade would be content with this simple statement and show constant horrific examples ad nauseam, the author goes beyond and shows the extreme opposite and shows the land of China (this would be the last few decades of Imperial China) as one who openly embraces sex and violence as a matter of course and a natural part of human behavior. The flip sides seems to be much worse than the stuffy European way of life.
The epitome of this is shown in the character of Clara, "fairy of mass graves, angel of decomposition and decay". She is an extreme example of a fin-de-siècle (femme fatale), an all-powerful near-necrophilia who treats men as puppets and enjoys their humiliation. Sadistic and morbid, she experiences an intense and ever growing sexual pleasure on viewing elaborate executions, whose art was perfected by China, as opposed to industrial and technological massacres, which were practiced on a large scale in Europe without any concern for art, i.e. the guillotine (something that De Sade laments as well). She is a monster allowed to give full flight to her perversions in this horrible place.
The plot is fairly simple. A French politician's dirty trickster is sent on a pseudo-scientific expedition to collect seaweed in order to discover the origin of life. In reality, he is being put out of the way as he has become a potential embarrassment to the politician. He quickly abandons his pursuits when he falls under the spell of Clara, an English woman, who wraps him around her little finger. For over two years, he goes back and forth, until finally she takes him to the Torture Gardens of China, where scenes of great floral beauty are displayed amongst the horrible death, torture, and humiliations of condemned prisoners.
For more readings, try books by Rex Hurst. 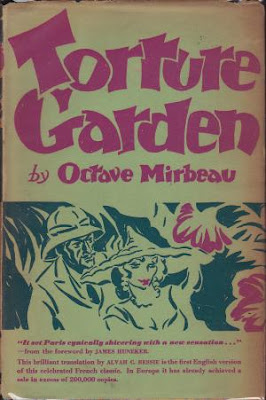