Looking Outward: The Federal Prison System from the Inside (History) (True Crime) 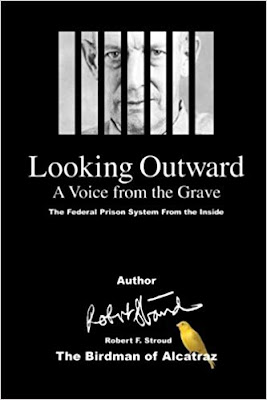 
“It is impossible to consider the problems involved in prison management without having some knowledge of the various elements entering into the prison population, and the population of Federal prisons has always borne a distinct relationship to the peculiar nature of Federal offences. Back at the turn of the century the principal Federal crimes were: counterfeiting; smuggling cloth, chinamen, and opium: robbery of Post Offices and mails in different forms, such as train robbery, Post Office burglary, and various forms of pilfering from the mails; mail fraud; violation of the National Banking Laws; dereliction in office, principally of postal employees; and violations of the liquor laws.”

This is the prison memoir of Robert F. Stroud, the famous Birdman of Alcatraz - probably the most famous prisoner in the history of the United States. Considering that Stroud died in 1963, this publication is long overdue.
For those who are unaware (and Stroud glosses over certain unflattering facts in his biography). Originally from Seattle, Stroud ran away from his abusive father at the age of 13, and by the time he was 18, he had become a pimp in the Alaska Territory. In January 1909, he shot and killed a bartender who attacked his mistress, a crime for which he was sentenced to 12 years. He gained a reputation as a dangerous inmate who frequently had confrontations with fellow inmates and staff, and in 1916, he stabbed and killed a guard. Sentenced to be executed, the verdict was commuted to life imprisonment by Woodrow Wilson.
﻿
﻿

Imprisoned at Leavenworth, he began raising pigeons in order to keep his sanity. The prison was under the congregate system where prisoners worked during the day in groups and were kept in solitary confinement at night, with enforced silence at all times. He became famous for writing a book on the various diseases he discovered in birds and various cures he uncovered.
This book, however, is on the Federal prison system in the United States, its history and development, focusing specifically on his first two places of incarceration: Leavenworth and McNeil Island. He gives detailed accounts of their history, their policies, the type of men who ran them, food, work, and other daily routines. He also gives various anecdotes of things he witnessed while imprisoned. Violence and homosexuality are discussed in a matter of fact notion. His views on it are that if a man in confined to a place where there are nothing but men, it is a natural occurrence. He also mentions the practice was common enough in rural Alaska where the ratio of men to women was 25 to 1. All in all, it is an interesting first hand read of a prison system that has become defunct.

While many of the facts check out, Stroud himself is quite an unreliable narrator. First, as he readily admits, most of the information comes from memory, but he also admits when he cannot remember a fact or might be misremembering it. Secondly, he often recounts conversations to which he himself was not privy and relies on hearsay to fill in the gaps. Third, as many people around him have pointed out, Stroud was something of a sociopath and narcissist. He constantly refers to himself in the third person as “The Writer” and never admits to making a mistake. He doesn’t dispute his crimes, but only talks about them in flat factual statements. “This is what I did. I have no opinion on it.” In short, he comes across as one of those people who could only thrive in a heavily ordered and structured system like prison.
This was meant to be book one of four on the Federal penal system, however only this one has been published and since it came out in 2013, I don’t think the rest will be forthcoming. The only way to see them, as far as I know, is where they are warehoused- The Missouri State Special Collections archives. The reasons for why no more books have been forthcoming may be legal, but possibly financial.
The men who produced this book, obviously don’t have much experience in formatting, and didn’t bother to learn or correct their errors as this is one of the most inept book formatting jobs I’ve seen- even for independent publishers. There are numerous typos (but only in the first 20 pages to be fair), the type face is small, printed in single space with a blank line between paragraphs (almost military style) and often paragraphs would break up mid-sentence. Very poorly put together.
For more readings, try books by Rex Hurst.