Weird Love: That's the Way I Like It (Humor) (Graphic Novels) 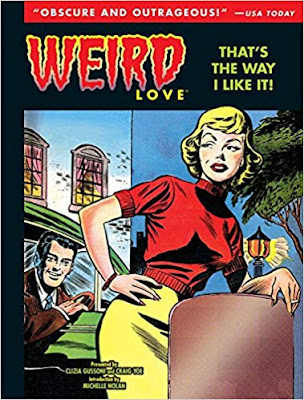 “The vast majority of the stories were written, drawn, and edited by men- middle-aged men, at that - and many of those stories were, indeed, readable, just as the more than 7,000 romance pulps produced from the 1920s to the 1950s were readable. But they weren’t read by the boys and men who made up most of the first generation of comics fandom. They were read almost entirely by post-pubescent girls and young women, who weren’t noted for saving comics but were very much aware how much they were beginning to seek love in their lives. Indeed, my guess is that romance comics were among those most frequently passed around by young readers. But they were seldom saved.”

Michelle Nolan- from the introduction.
This is a collection of twenty old-time romance stories from the silver age of comics. It is easy to forget that romance comics, like westerns, were a viable comic genre on par with war and superheroes. In fact, when the genre was created by Kirby and Simon, superheroes were the weak sister of the comic world.
Most of the stories are not from Marvel and DC, indeed those two had not come into full dominance of the comic market and had to compete with the likes of Harvey, Charleton, Archie Comics Group (ACG) and so on. What stands out to me, and as is pointed out in the introduction is that romance comics, once flourishing, are incredibly rare to find. I’ve been to many many comic conventions and shops, dug through thousands of long boxes- from cheapo 25 cent racks to high dollar encased-in-carbonite issues- and never run across a single one. Never. They just weren’t collected by those people who built the market. And probably I would’ve never thought to buy one if I had. 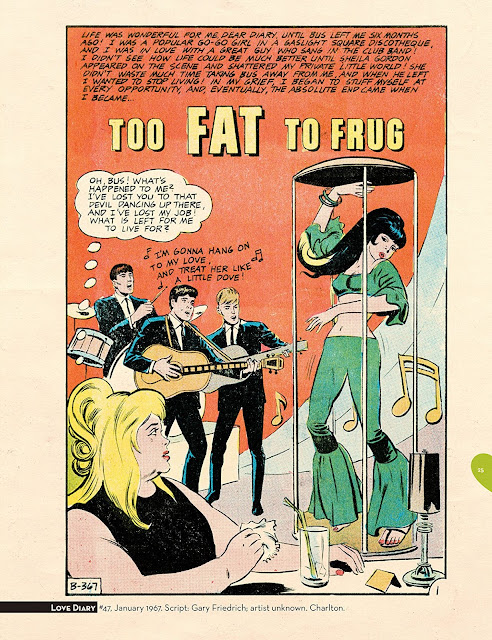 The nature of these stories cover the 1950s to the early 1970s and vary in style, The earlier ones are more action oriented with titles such as “Love Slaves” or “Stay Away from Married Men”. Probably because those who wrote such stories didn’t know exactly how to relay a purely romance tale. As the decades rolled on, however, the stories changed to almost silly tales directly relatable to the target audience. Most of the characters are around the same age as their readers and have “relatable” issues- mostly about boys and fitting in. As exampled in the stories “Too Fat to Frug” - Frug is a type of dance from the 60s you perverts - and “A Monster’s Kisses” - about a newlywed who can’t stand her husband’s new beard.
Two standouts among these are “Men You Shouldn’t Marry” from Romantic Adventures # 11, which gives some good advice on types of guys to avoid. And “Heart Clinic” which discusses how our attitude to love and what makes a good mate changes and matures over time. Like the others you can take these stories with the campiness that they have become, as well. Perhaps they were camp back in the 50s, and 60s, and 70s, but they must’ve been devoured by their readership. Now camp value and our laughter will keep them from being forgotten forever. 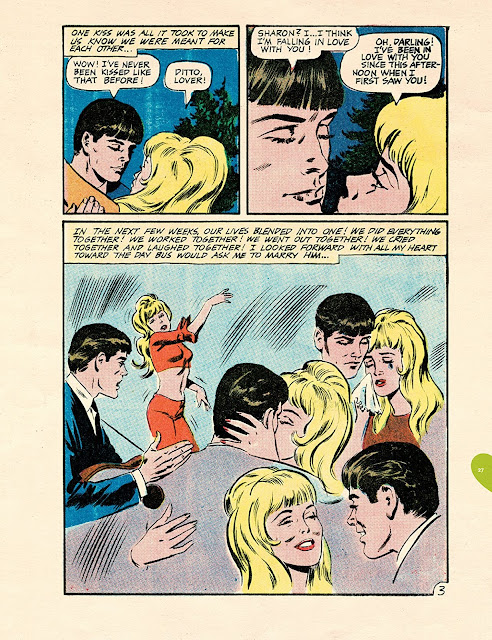