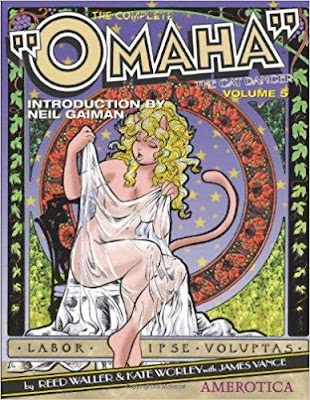 “Omaha the Cat Dancer is a soap opera, but it's a drama, not a melodrama; it’s a funny animal comic, but the funny animals are real people; and its neither erotica nor pornography - simply a story in which the virtual cameras continue to roll while people take their clothes off and make love (just as they do in the world you and I inhabit) - delineated with an unblinking charm which has the odd effect (for me at least) of making one wonder where all the sex has gone in the other fictions one reads or hears or sees…”


-From the introduction by Neil Giaman


Here we are back again with volume five of The Complete Omaha, the most controversial comic of the 1990s (and possibly beyond- thought most comic “fans” don’t seem to have heard of it. In fact they never seem to have heard of anything that isn’t shit out by Marvel or DC. Is that really a comics fan? Or is it just a fanatic for those two companies? Lady and the Tiger- the choice is yours). This book collects issues 14 through 17 of the series. 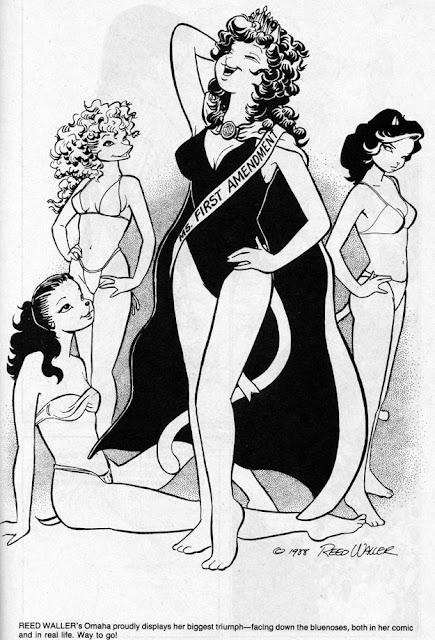 For a series where one of the main selling points was graphically portrayed sex, I will say that it never became repetitive. The author and artist was always trying new things. Here we have the first lesbian sex scene amidst a host of other titillating scenes, averaging about one per issues- so four!


The soap opera continues. The investigation into Senator Bonner assassination moves away from the prostitute Joanne and starts to focus on Omaha after the police discover that she, coincidentally, moved out of town the same day the senator was killed. Omaha begins her new life as a stripper and meets a new guy, while her old guy becomes ground further and further down into the much of the world. Both Omaha and Chuck find solace in other lovers, while political forces maneuver to complete the corrupt A-block renovation. 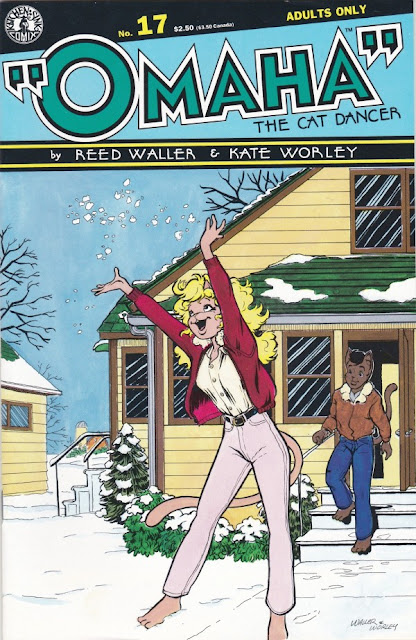