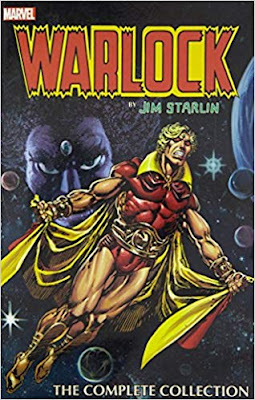 
Jim Starlin did not create Adam Warlock but, like Captain Marvel before him, the character was perfected by the man. Believe it or not, the greatest stories told in the Marvel Cinematic Universe began in the pages of Captain Marvel and Warlock - which is strange as neither of those protagonists have turned up in the films.


Thanos began in Captain Marvel and ended (at the time) in Warlock. Warlock himself is powered by the Soul Gem, one of the Infinity Stones- which have been so integral for Marvel phase three films. The stones were first introduced in these issues, along with the characters of Pip the Troll, Gammora- The Deadliest Woman in the Galaxy, Warlock’s future evil self, The Magus- who again would become integral with the Infinity series later in the 90s, and certain cosmic characters: Lord Chaos, Master Order, and the In-Betweener (Infinity Gauntlet, Infinity War, Infinity Watch, Infinity Crusade, Infinitely Derivative).


The title is a bit deceptive. This is not the complete collection of the Adam Warlock series, which went on to issue 18, but instead it is the collected issues that Jim Starlin worked on the character. The original Warlock comics had been cancelled after issue 8, but Starlin later revived the character a few years later in Strange Tales- an anthology series where marvel would often try out new character, or try out smaller stories from less popular older heroes (for years they Strange Tales would have two stories. One staring Dr. Strange, and the other Nick Fury of S.H.I.E.L.D.- since neither could carry a book on their own. 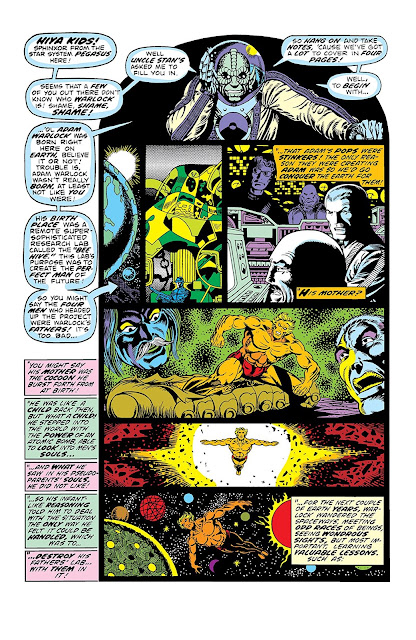 As such, this volume contains issues 178-181 of Strange Tales, issues 9 -15 of Warlock, Avengers Annual #7, and Marvel Two-In-One Annual #2, and the rough pencils for a filler issue of Warlock that would've been issue 16. The book ends with the death of the main character and Thanos being turned to stone. Of course, both of these were later reversed in other books. Can’t let a property lie dormant- not when there’s money to be had.


Everyone says that Starlin was the king of the cosmic comic story. Part of that is because no one else really was telling similar stories. Certainly no one else was creating characters that were solely based on those story lines. Warlock, now given independent life when the soul gem is implanted on his forehead by the High Evolutionary, comes into conflict with first a future version of himself that has gone mad, the Magus, and founded a soul-crushing warlike church to worship himself, and then against Thanos, the Mad Titan who is on a war of extermination to win back his former lover, Death.


Starlin obviously had a plan for the character, but the series was cancelled before it came to fruition, so he quickly wrapped it up in the pages of the two annuals. Starlin is to fault with the series cancellation. The two issues following the Magus’s defeat was a terrible filler story where he goes up against a terrible villain with a terrible name, Star-Thief, whom he doesn’t even really defeat. Had he gone directly into the storyline we see in the two Annuals, I think the comic would’ve at least lasted another ten issues (remember the 70s were a volatile time for comics). On the other hand, I could be dead wrong. Ah well. 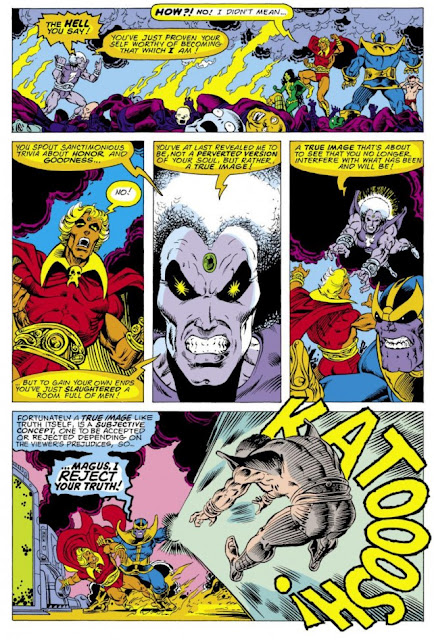