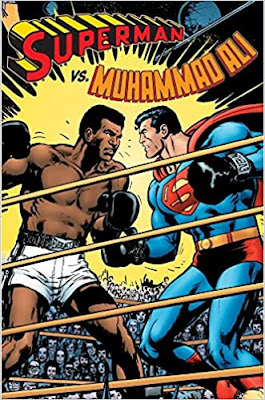 
This Versus graphic novel was the brainchild of Don King who approached D.C. comics about a meet-up between Ali and the Man of Tomorrow. Superman had met plenty of famous people before, but this was the first time he had shared equal billing with the celebrity. Ali, at the time, was Heavyweight Champion of the World and a cultural icon. The project was handed over to Neal Adams and Denny O’Neil - if you know comics, you remember their names. Neither of them slacked off. Especially in the art department. These are some top notch illustrations. Truly amazing and the price is worth it just to gaze upon these beautiful illustrations.
If the actual story seems silly to you, just remember the comic industry wrote for thirteen-year-olds back in the 1970s. An alien race comes to the planet and demands that Earth's greatest champion battle their world's own greatest fighter, or risk Earth’s destruction. Both Superman and Muhammad Ali step forward -- and to determine who is truly Earth's greatest fighter, Superman temporarily loses his powers and faces Ali in the ring. There are a few twists and turns and it is discovered that the alien emperor would blow up Earth no matter the outcome, so Ali and Superman have to work together. The moral of the story being about fair play and giving everyone an equal chance no matter where they came from. 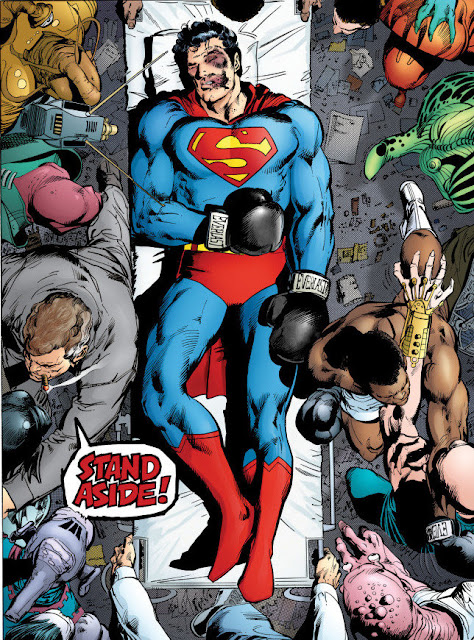 However part of this does end the myth that Superman doesn’t kill. In the scenes where he’s taking apart an entire alien armada, he blasts through them, and tossed huge pieces of metal to destroy and cripple the ships. Those aliens aren’t surviving that. If they’re not blown up outright, the ultimate frigid indifference of space will claim their souls eventually. So with fifty ships, holding a minimum of fifty crew apiece, Supes let die 2500 aliens. Ah well, they were all evil.
This is the deluxe version, a reprint of the 1978 original. This volume also shorter than the original, which was published 11 x 9 x 0.4 inches. The deluxe version however is printed at the smaller 7.3 x 0.5 x 11.1 inches. There was no real lack of quality in art from version to version. The paper is glossy in the reprint, which is much nicer than the original, and it includes comments from the author and illustrator, plus the rough sketches and a breakdown of the original cover, where the audience is filled with notables from TV, cinema, comics industry and D.C.s own creations. Don King is standing next to Lex Luthor for example. The original is also extremely expensive, over a hundred dollars, so go with the deluxe version at around fifteen.
For more readings, try books by Rex Hurst. 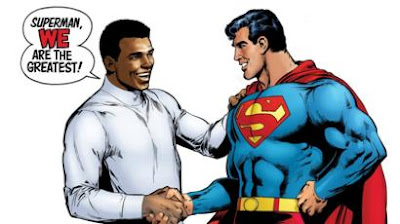