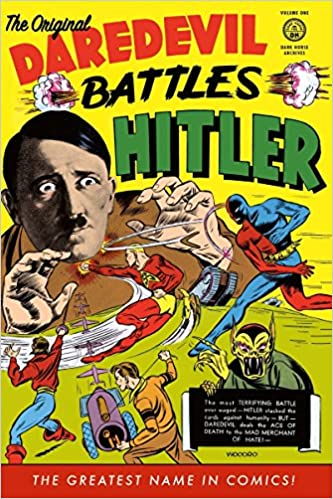 This is a golden oldie and don’t feel ashamed if you’ve never heard of the titular character or any of the other heroes within. They are all leftovers from the original golden age of comics in the late 1930s and early 1940s. And while Daredevil comics (the original that is) was one of the most popular titles, when consumers dropped it- they left it behind and didn’t look back. As such, our blue and red friend here, was only revived maybe ten years ago with the Project Superpowers comic that brought back a ridiculous amount of public domain comic heroes.

This collects the first four issues of Daredevil Comics from 1939 and 1940. These are a little different from what you may be used to. Every comic title in this time was almost an anthology. While the titular character (if there was one) would almost certainly be shown and given the most space, this would be only 8 to 10 pages out of 64. The rest would be filled up with shorter features and recurring characters. These secondary features were usually bought by the yard from third party agencies as volume stuffers. Thus, they could appear and disappear as needed to fill up an issue. Plus a handful of bad letters from the fans could spell the death of a virgin backup character in these comics. 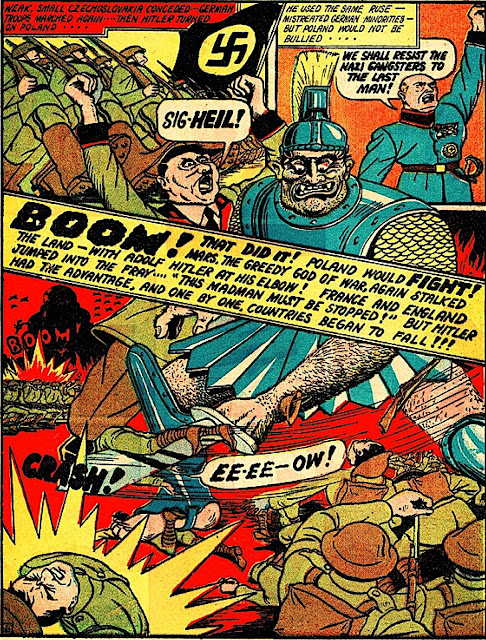 The character of Daredevil started in Silver Streak Comics as a backup feature, until a classic five part story by veteran Charles Biro, pitted him against The Claw. This story was so popular that it catapulted both hero and villain into top-tier sellers. Now he is given his own comic and unfortunately the writers didn’t learn from the experience. A superhero’s popularity is based primarily on the villains he fights. Daredevil, who has a Bruce Wayne background and no super powers, fights the standard array of smugglers, jewel thieves, Nazi saboteurs, and assorted gangsters. The only memorable ones are in the first issue when he takes on the Nazi high command in a series of stories.

The Claw is one of the rare villains to star in a backup feature. He is twenty feet tall monster, with sharp teeth, piss yellow skin, and a fanatical desire to destroy and conquer. His origins are shaky, but eventually he is described by his followers as The God of Hate. He is on a mission to conquer America and is brutal in his attempts. These stories - again, very rare for their time - are brutal and fun. There were written before the Comics Code Authority was commissioned so people were openly shot and killed without hesitation or repercussions in some cases. Following him were a menagerie of different heroes who all managed to be bland. Nightro - a near blind man who needs polaroid lenses to see and fights crime with his trusty seeing -eye dog (no joke). How he can beat people up so well has remained a mystery. London - an English adventurer who spends his time as a news announcer and nights stopping Nazi spies and saboteurs. Pat Patriot - a woman who accidentally stops a smuggling ring and then goes on a USO tour and keeps stumbling into pockets of saboteurs trying to demobilize the troops with drugs and diseased women. Real American No. 1 - a Native American lawyer who dresses up as superhero The Bronze Terror when defending the people on his reservation from crooked politicians and sheriffs in modern America. Whirlwind - a boxer who keeps getting into trouble with gangsters. Dash Dillion - a “humor” piece about a dizzy college student who is good at sports and all the hijinks he gets into. Thirteen - A man whose life is plagued by the number thirteen, dons the disguise of 13 and goes to fight crime in order to rid himself of the number’s curse. I think?  Pioneer - who only made an appearance in issue 2, then disappeared. Kind of like an early Forrest Gump, a simple man stumbles in with some gangsters and then winds up on top with five grand. 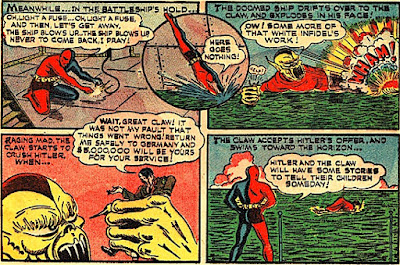 What struck me about most of these is how none of them have superpowers. Not even our titular hero. Yet they easily swing around, doing back flips, and knock out villains with one punch. Even the dog jumps around on fire escapes and up walls and so forth. It makes perfect sense why most of them were forgotten and never revived - with the exception of The Claw and Daredevil.

Usually when a person introduces a new superhero, the first question asked is “What their superpower.”

For most of these, the answer would be, “None, but they can hit really hard.”

Where’s the fun in that? And when you’ve seen it ten times in a row, it is incredibly same-y. 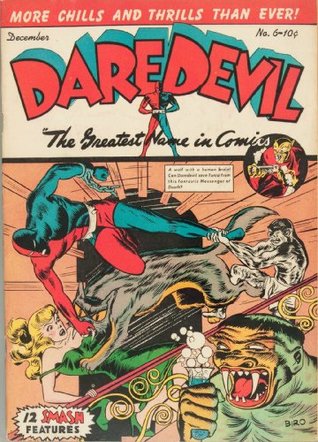