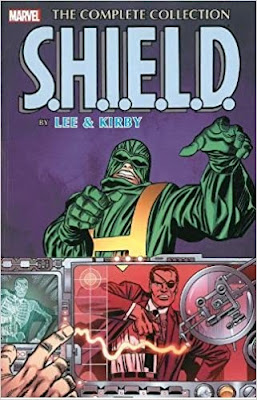 By Stan Lee and Jack Kirby

This book collects issues 135 - 150 of Strange Tales, plus issue 78 of Tales of Suspense and issue 21 of the Fantastic Four. These issues date back to the beginning of Marvel blossoming out of mobster books and taking the comic world by storm. In the early sixties D.C. ran supreme but with the new interest in revamped Superhero titles, Marvel started to catch up. However, due to publishing problems, Marvel was limited in the number of titles it could publish. Thus they often doubled-up titles to hedge their bets. Thus the stories here are truncated as they were spilt between The SHIELD stories and those of Dr. Strange.

Nick Fury was already part of the Marvel Universe as part of the Sgt. Fury and his Howling Commandos title which took place in World War II. He was brought into the modern times (of the 60s) with Fantastic Four #21 , where he is a colonel in the CIA. Starting with Strange Tales # he is inducted into the newly created SHIELD to fight the menace of Hydra. 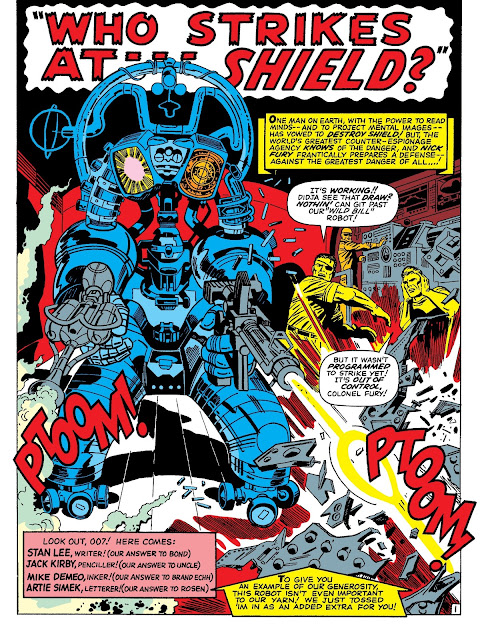 Hydra's origins would later be retconned (Marvel's first retcon in fact) so as to be created by Baron von Strucker with Nazi gold and the remnants of the Odysessa organization.However, for these issues it was started by Arnold Brown, an unobtrusive nobody in real life. He is eventually accidentally killed by his own agents. Later on we see the origins of A.I.M and the Secret Empire, both wings of Hydra - though the Secret Empire isn’t used much anymore.

The stories are what you expect from Lee and Kirby. Over the top. Crazy material. Loaded with kinetic energy. Each had a distinctive style that added to the 60s elements of wild spy agencies with acronyms names. Loads of retro fun. Additionally, despite what the title states, several of the issues are drawn by John Severin instead of Jack Kirby. That's okay in my book, Severin was just as good an artist as the King. 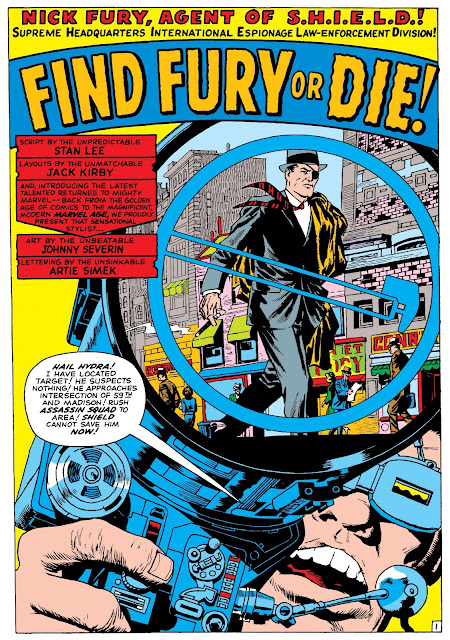