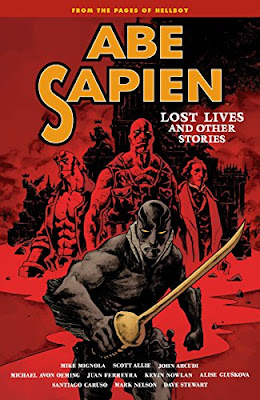 
This is a collection of various short stories which appeared all through various other titles connected to Hellboy. They are not part of the Abe Sapien series, the last issues of which were collected in the previous volume. As most anthologies go, they are fun, but uneven in their quality. If you can get it cheap, this book will fill an hour of your time with fun.
“The Land of the Dead” sounds as if it is going to be a descent to face ancient Mayan Gods, but in fact delves into the Hellboy universe’s lore of vampires. The Hellboy series has always had a love/hate relationship with vampires. They don't seem to fit very snugly into the Hellboy cosmology, but are ever present, just behind the scenes. This story does slightly tie into the vampire tales from Hellboy: Wake the Devil. My only complaint is that the short reads like a Hellboy tale with Abe Sapien as a stand-in. Too much hitting, not enough thinking. 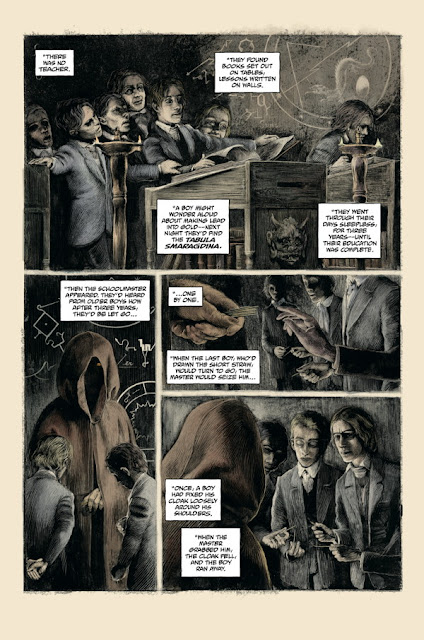 “Witchcraft and Demonology” gives a history of Sapien's often unseen nemesis from his solo series, Gustav Strobl. Mixing old satanic folklore, including the underused Black School of witchcraft, we see his attempts to find a position in the army of Hell before the Armageddon. He was the last Man standing once Hell had been extinguished and seeks a new life, but his past is full of darkness. Probably the best story in the bunch.
“The Ogopogo” takes place in the 1980s, teaming up the titular Sapien with Hellboy again. The Ogopogo is British Columbia's answer to the Loch Ness Monster, a supposed sea serpent creature that attacks tourists. Abe and Hellboy stumble across a killing possibly related to monster, but what they actually find subverts their expectations, in typical Hellboy fashion.
“Subconscious” is very short, even among a collection of short stories, but is easily the most beautifully illustrated one of the lot. It deals with a dream of Abe Sapien where he delves into a sort of Rime of the Ancient Mariner wreck and meets something very off. 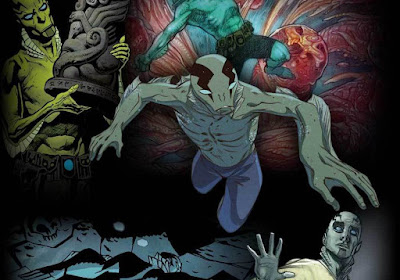 “Lost Lives”, the lead story, deals with a time before the Hell on Earth maxi-series of BPRD, after Abe discovers part if his origin as a Civil War era scientist Langdon Caul. As the rest of the BPRD works around him, Abe tries to take in this information about a life he had no memory of. Throughout the story runs the subject of how much if our personality is our own invention and how much is influenced by others. Many characters who have died run in and out this story.
“Icthyo Sapien” is the final story. Its lead is Abe Sapien’s previous incarnation Langdon Caul, who joins the Oannes Society and becomes part of an expedition which butts heads with its rival organization, the Heliotropic Brotherhood of Ra. Violence erupts, blood falls, and a few mysteries are revealed. A good addition to the Abe Sapien mythos.
For more readings, try books by Rex Hurst.

For more readings, try books by Rex Hurst.
Posted by RexHurst at 4:09 PM