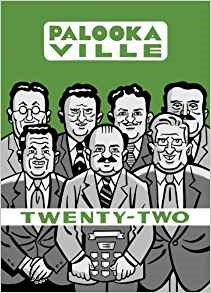 This is the penultimate (maybe) issue of the independent series, Palookaville, published over twenty years by Canadian artist Seth. Much of what I have to say will be a bit repetitive from my last review of Palookaville Twenty, but I don’t anticipate this being a long review. So take your pick, read this or the last one, both or neither. C’est la vie.


Again, the reason I am covering a single issue is that the series moved from a bi-annual (more or less) standard comic format of 25 some odd pages and a glossy cover to an expanded hard backed semi-annual edition of over one hundred pages.


Those who actually pay attention will notice that I jumped from a review of issue 20 to one of issue 22. The reason is that I find most of my books in sales bins and discount racks. I found issues 20 & 22 in a half-off bin in Queen City Comics (the only decent comic shop in left in Buffalo, NY). Issue 21 wasn’t there, thus I did not buy it. Straightforward? Damn straight. 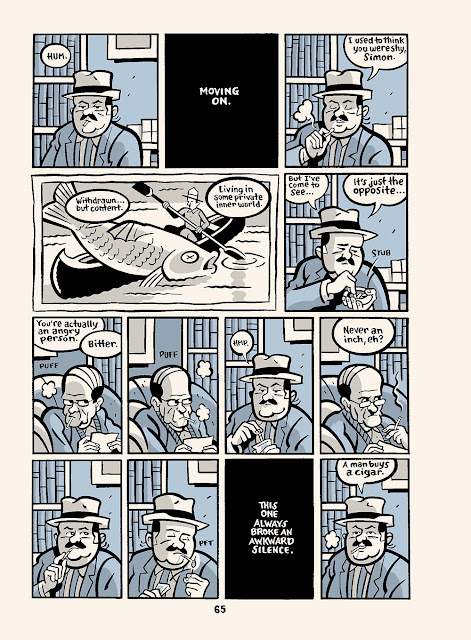 Seth is one of the best artists out there. He is capable of expressing the depth of human emotion with a few brush strokes, even though most people say he seems like an alien in person. Even if he is, Seth’s observations on the human condition are dead on.


There are three sections in this issue. The first is the penultimate chapter in the Clyde Fans series.  It is the ongoing story of two brothers (one an introvert, the other an extrovert) who must deal with their emotional problems after the collapse of their fan company due to the rise of the air conditioning industry.
The second story, if you can call it that, is an expose (with a fold out comic in the middle) of the author’s wife's barber shop, The Crown Barber Shop. Seth apparently designed it after a fictional place in his Dominion City model city (Where the story of Clyde Fans takes place).


The third is part one of an autobiographical retrospective of his childhood, his extreme awkwardness, and his developing love of comic books. It is an interesting look at an isolated (but not lonely) child making sense of the world- and never quite managing it.
For more readings, try books by Rex Hurst. 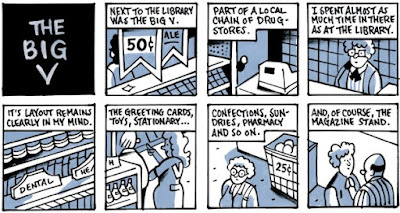