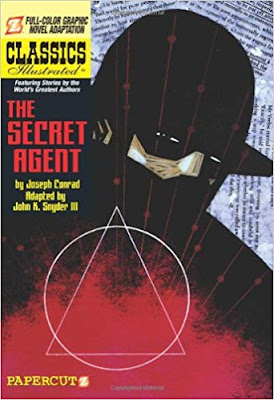 
Here we have a classic from yesteryear by one of the greatest writers in English literature, Joseph Conrad. Secret Agent, while far from his best work, is a classic in its own right and made infamous for being the Unabomber, Ted Kaczynski’s, favorite book. Perhaps even inspiring him into his favorite pastime of blowing things up.
Joseph Conrad is the author of many deep classics that appeal mostly to males, Lord Jim, Nostromo, and Heart of Darkness- which was the inspiration for the seminal film Apocalypse Now. If you haven’t heard of any of these please get a library card and liberate yourself from illiteracy.

Originally published in 1907, the story centers on Adolph Veloc, a leading member of an anarchist cell (the modern equivalent of this would be Antifa) and a paid agent provocateur of a foreign power. A rather indolent man, whose cover identity is selling pornographic items and other bric-a-brac out of a small shop, he is ordered to bomb a public building to stir the populace against the anarchist. Veloc is your typical anti-heroic Conrad protagonist forced into circumstances well beyond his ability to cope with.
There are no heroes in this novel. The police and other authority figures are mostly concerned with their own personal advancement and stab each other in the back with regularity, while the anarchists are even worse. Petty leeches, who complain about the system, but are unable to take care of themselves and live off of women that they dupe. They are seen as ineffectual big talkers who are incapable of anything except fraud and self-indulgence. Which is pretty accurate for your standard “activist”. I think Solzhenitsyn wrote it best when he said "activist" is just a synonym for “big mouthed loafer”.
The art is good, somewhat different, but meant to express emotions as much as action. I would characterize it as a sort of cubist art deco.


The problem I have with this book is that it really is geared for younger readers. As the presentation concentrates primarily on the dialogue between disparate figures, the action is muddled. Perhaps this wasn’t intended to be read by younger people as was the first incarnation of Classics Illustrated in the 1940s, but the confusion might reach out to older readers unfamiliar with the novel. Having read the original prose novel I understood what was happening, but the graphic novel has a habit of jumping character perspectives (as did the original) without any transitions and the semi-abstract illustrations would cause momentary confusion as to who was talking.
For more readings, try books by Rex Hurst.