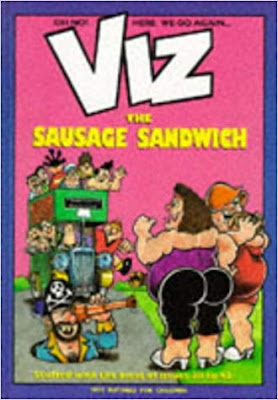 This is a collection of five issues of Viz magazine, an “adult” comic magazine from England, which shot to fame and prominence in the 90s. It is still around today, albeit, the magazine's heyday is long since past. The term “adult” in this case means a large number of sexual jokes and profanity (large for when it was first published at any rate. By modern standards it’s all rather tame). If you are actually mature much of the material will seem tedious and juvenile- luckily I am not mature.
The material is this book is very uneven, going from hysterical to lame to boring. With so many different people producing material, so many cooks in the stew, they can’t all be masterpieces. However the ones which fall the flattest are those who indulge in topical humor (making fun of forgotten politicians and celebrities of the day)- nothing goes stale faster than topical humor. Second on the fail are the photo-strip stories, where photos are taken and plot bubbles added. I’ve never found these funny. No one has done them well. Not Weirdo, not National Lampoon, no one. They are inherently not good. Finally, the third lamest ones are all of the newspaper parody, fake adverts, and “funny” letters column. The time people laughter in these was long and dry. The Onion they are not.

Where does that leave us?  With the strips which were funny- which is at least 65% percent of the book (I only paid three dollars for this hardcover, so I am content. Had it been more, I would’ve felt ripped off). Most of the running strips are pretty good, Roger Mellie ( tv personality who is always doing the wrong thing on a show) , The Fat Slags (two entitled overweight whores who fuck and slum their way through life), Millie Tant (a social justice warrior type- before the term was even around- who bitches about everything that SJWs bitch about now), Spoilt Bastard ( about the worst kid in the world- I think this would’ve found it funnier when I was a kid, now I just want to wring this little fuck’s neck), and Billy the Fish (a fish with a human head becomes part of a soccer team). The rest of the one-shots were all hit or miss, but mostly on the funny side. The ones which got me were those whose names were funny off the bat- Speckly Twat, Terry Fuckwit, Sid the Sexist and so on.
Viz never really made it across the pond, hence this being my first exposure to it despite collecting for several decades now. I can’t say that I hate it or love it, granted I would have to look at modern material to judge, but this stuff originally printed in the early 80s doesn’t have much of a punch left. I’m sure when it came out it was very edgy, but the edge has moved considerably.
For more readings, try books by Rex Hurst. 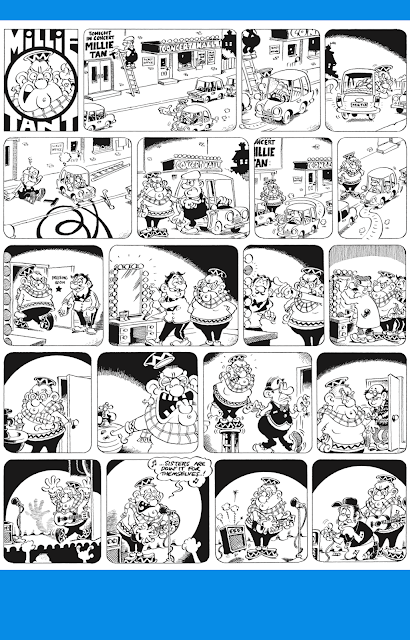