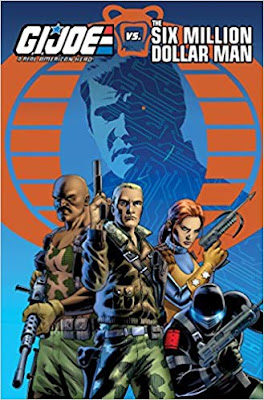 At last we have the crossover that we never asked for, but strangely always should have. G.I. Joe vs The Six Million Dollar Man is a violent tribute to the seventies action star, Lee Majors who fits strangely easily into the G. I. Joe universe.


For those who are unaware the Six Million Dollar Man was a TV show that ran from 1973-1978 starring Lee Majors. The premise was a NASA astronaut Colonel Steve Austin crashes an experimental plane and is rebuilt using new bionic parts. His right arm, both legs, and left eye are replaced. These new items enhance his strength, speed and vision far above human norms: he can run at speeds of over 60 mph (97 km/h), and his eye has a 20:1 zoom lens and infrared capabilities, while his bionic limbs all have the equivalent power of a bulldozer. He is then recruited by the OSI (Office of Scientific Intelligence) as a secret agent. This was all loosely based off the novel Cyborg by Martin Caidin. 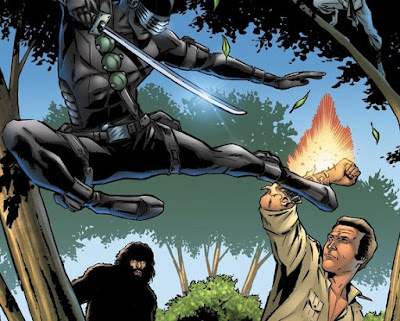 Fans of The Venture Brothers will note that this character and OSI- only in the Venture universe is called the Office of Secret Intelligence- is part of their main lore as well. In fact Austin and his most memorable opponent, Bigfoot (originally played by Lou Ferigno), appear in the series as cross-species lovers. Both OSI are plays on the original OSI, or Office for Strategic Services, which morphed into the CIA.


In this variation, Cobra has captured and brainwashed the Six Million Dollar Man into their service. They then take over a small country, rich in resources, and begin to play havoc. The Joes are sent in to stop them. Violence ensues, a secret weapon is deployed, and I’m sure you can guess the end. Light, fun, and all your favorite Joes in a big bundle. 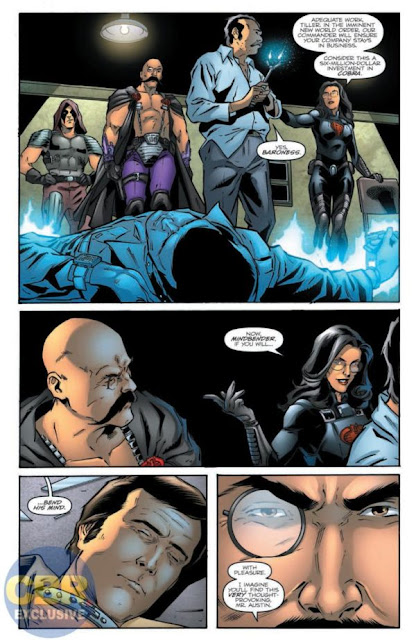 The only bone I have to pick is that they writer didn’t go far enough. This is obvious a one-shot deal, so kill a few characters. Whack a Joe or two. In a self-contained story it’s perfectly acceptable, makes it even more interesting. Another quibble is that the writer seems to make the same mistake everyone but Larry Hama does when writing Snake Eyes. Being a ninja is about stealth, misdirection, and silent action. It doesn’t mean you’re invulnerable and can run at four guys with automatic rifle while wielding a sword and still beat them - as happens in this comic. Snake Eyes has never been above using a gun once he’s been spotted.


I have to give this book credit for not only bringing in the Six Million Dollar Man, but reintroducing the character of Mike Power, the Atomic man. A little more history here. In the 70s, Joe Colton, the original G.I. Joe, character was changed to more of an adventurer type, since the military was in disfavor among the media, and companions were added to help him explore. One being the Atomic Man, who was essentially Six Million Dollar Man rip-off. The toy came with transparent mechanical arms and a red flashing atomic eye. This was an awesome twist. It has been long established that Joe Colton was part of the G.I. Joe verse, so slipping this guy in was a no-brainer. 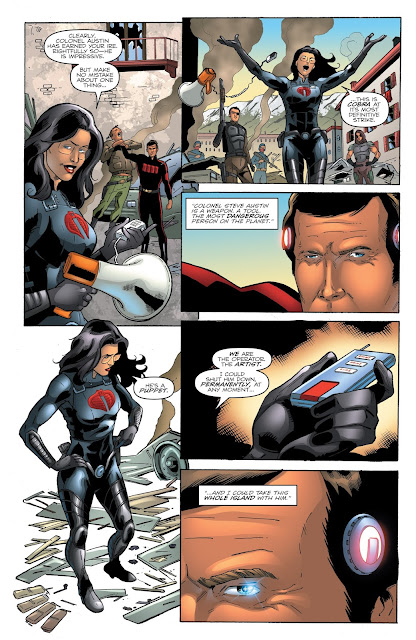