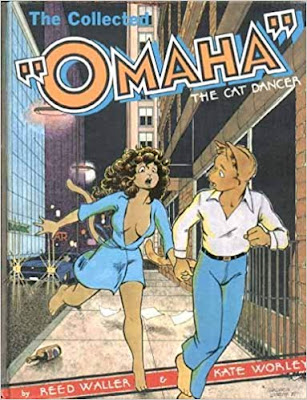 
During its time, Omaha was the most controversial comic of its day. Not for its frank depiction of sex- of which there is plenty- but because the sex is a by-product of the story. Thus, the literary merits of the comic was always under debate. Before that there had been plenty of sex comics put out by underground commix publishers, but these had been almost exclusively juvenile in nature (despite being an adult topic), lots of sex coming out of nowhere, rape fantasies, with the coherence of a porno. Done more to shock than titillate, with definitely no narrative. Most come across like a child being able to swear for the first time and trying to shock mommy and daddy. 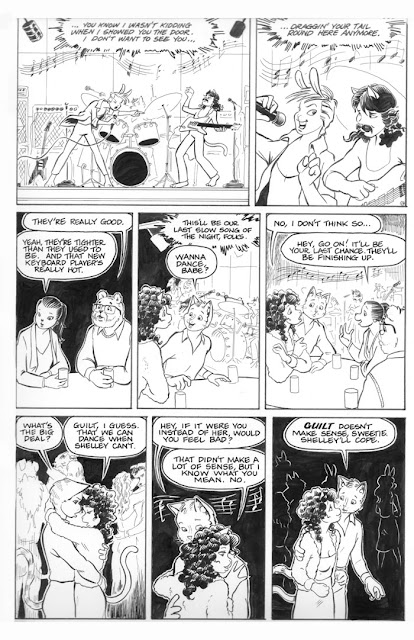 This collected Omaha is being published in chronological order as it occurred in the comic’s timeline. Several of the short stories in the beginning were written years later, so there is a very noticeable jump in the quality of art between some stories and in the quality of writing. At first it was all written by artist Reed Waller, but eventually Kate Worely took over the writing duties. We only see her hand in a few short stories, but the difference is noticeable. Aside from many short pieces, Omaha the Cat Dancer issues 0 and 1 are also included in this book.


Here we see the origins of the cat dancer. As you can see from the illustrations the characters are anthropomorphized animals, but that is the only connection to the animal kingdom. They act like regular people otherwise. Omaha becomes a famous stripper and rises to become Pet of the Year in some Hustler equivalent. Then her life is threatened when the mayor goes on a morality crusade and shuts down all the strip joints in the city. From there she and her boyfriend Chuck become involved in an underground club run for rich people, in which a riot breaks out. We have murder, violence, blackmail, and a mysterious figure behind it all. It only gets better from there.
For more readings, try books by Rex Hurst.