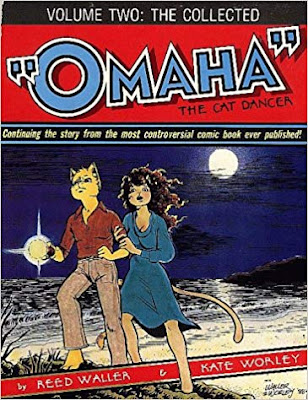 
Volume two the “most controversial series in comics”. Included in this book are issues 2 through 5, an introduction from the main writer who passed away in 2005, and a parody of the Twinkies ads that used to run in comics back in the 1970s and early 80s- only those who remember them would see the humor in it, otherwise it’s just bizarre.

As Kate Worley takes over most of the writing duties the Omaha world begins to take shape. One-dimensional characters begin to be fleshed out and a racy storyline unfolds. The sex scenes, while still at least one per issue, take a back seat to the drama. Unlike previous issues, and similar types of books, the characters are not just about sex- it is simply one normal aspect of their everyday lives. 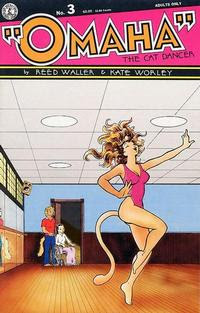 The soap opera ramps up. Charlie’s death by apparent manic-induced suicide catches his son and Omaha off guard. Suddenly their future plans fall through and the pair begin to drift through life. Charlie discovers that there is no death certificate recording his mother’s demise and a mysterious possible half-sibling emerges to challenge her brother over Charlie’s estate. Plus everyone gets laid- even the paraplegic girl.
The artist had now refined his style. Gone is the bigfoot line and splashy ink, now it’s all crisp clean lines well ordered. The style is a sort of comic realism in a similar vein to Milt Caniff’s style- the characters are done in an exaggerated style, anthropomorphized funny animal, but everything else is drawn straight and serious and with deliberate realism.
For more readings, try books by Rex Hurst. 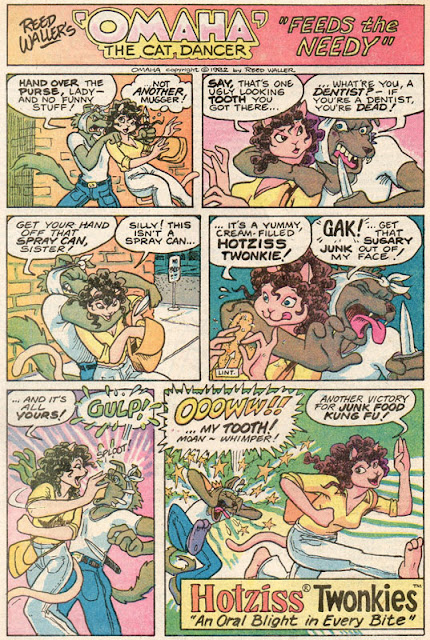