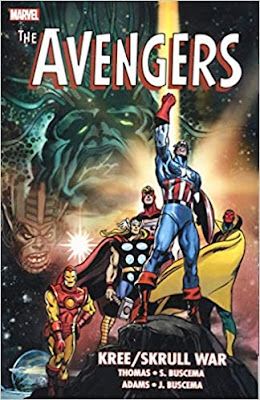 If there ever was an early 70s story that had weight, it's the story arc in issues 89-97 of The Avengers. This is the big one. It reintroduces every element of the Kree and Skrulls from every previous appearance, going back to Fantastic Four issue 2. The writing duty is broken up between Neal Adams and Roy Thomas. Both of whom added to the overall arc, but neither can agree on the specific details on who initially came up with what.

It contains nearly every Avenger at that time Captain America, Thor, Iron Man, the Vision, Quicksilver, the Scarlet Witch, and Goliath - which is Hawkeye when he was taking Pym particles to grow. With brief appearances by Ant Man, the Wasp, the Inhumans, Annaihlus, Ronan the Accuser, The Supreme Intelligence, Carol Danvers. With special guest appearances by Rick Jones and Captain Marvel - this is pre-Starlin Captain Marvel. What a freaking cast. 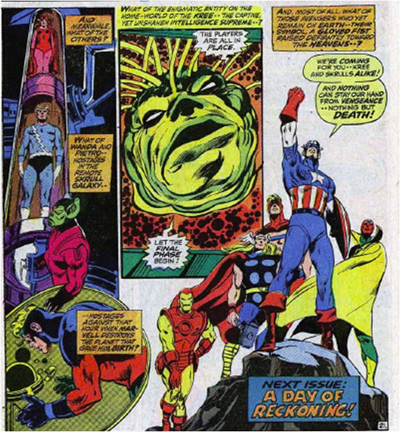 The long lasting effects of this story is well known, but the reader may be surprised when they are shown very little of the actual war between the Kree and Skrulls. It is mostly a series of independent stories that time together in an overall arc. Each story could be read independently, yet had leads to the issue previous and the following one.

Essentially the plot revolves around the aforementioned war where Earth is a perfect beachhead for either side. Thus what begins as a cold war between various espionage agents turns into a life or death fight for the preservation of Earth. 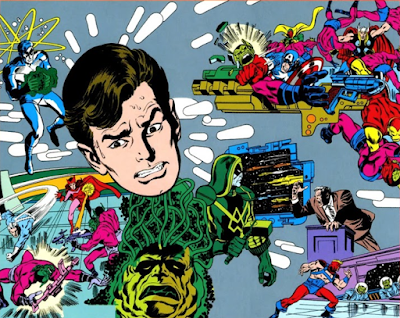