Shattered With Curve of Horn (Horror) 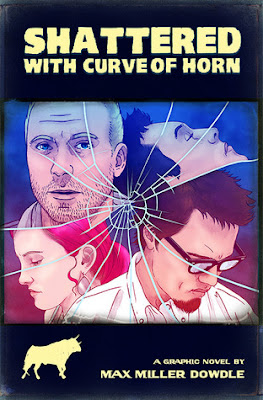 On the eve of a major exhibition of new paintings, prosperous artist Matthew and his wife Caitlin, a pharmaceutical company researcher, encounter an old friend, a philosophical ex-con named Pierce. Pierce confronts the couple about the enigmatic experimental drug they took eight years ago, and the puzzling circumstances that led to his incarceration. In light of Pierce's revelations, Matthew must fight to keep his marriage and career secure, for the secret of all of his success may have sprung directly from Pierce's tragedy. This is the first work by the author and illustrator, so I tend to go a little easy. Essentially this is an interesting story with sci-fi overtones - a drug that allows a person to share dreams with others, which the protagonist uses to steal inspiration from others and literally paint their dreams. The problem with this story is one of pacing. The story easily could have been told in half the time and much of the action takes place in a bland motel room - which doesn’t really allow the artist to show off his full range of skill.

Additionally at the end of the book, there are various bits and pieces - fake police reports, autopsy, various other personal effects of the characters- which probably would’ve been better used scattered throughout the story as hints of what was coming and the eventually big reveal. Again, this isn’t a bad book. It had some great ideas, but it doesn’t live up to its potential, especially when it comes to the dream sequences.