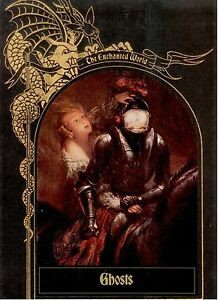 By Editors of Time-Life Books

“The sight of these apparitions, no matter how innocuous they might be, almost always struck terror in the hearts of the living. The fear of the dead is an age-old fear: That they should walk again seems to violate the processes of nature and deny the rules that reassure humankind of the essentially orderly structure of the universe. Moreover, a ghost is an animated memento mori, a distressing reminder to the living that they too will die.”

Unlike the previous three volumes, Ghosts does not dwell exclusively in the hazy days where myth, legend, and fact were mixed as one into a hazy stew. Ghosts fast forwards us into modern times. Or at least as late as the Victorian Age, which seemed fundamentally obsessed with death - with ornate cemeteries, death photography, and the spiritualism cults. As such the time is lousy with ghost stories. Rather than just dwell on story after repetitive story, this volume does a fairly good job reviewing the myriad types of spooks, their various alternatives, without retreading the same territory too many times. 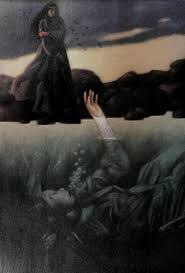 Chapter One - “Guises of the Reaper” - Deals with the ghostly representation of Death, if you couldn't tell from the title, throughout the ages and cultures. In fact, the grim reaper appearing is the genesis of modern ghost stories. A man sees Death as a portent of mortality, in some form, and then dies. The chapter also touches on the benign ghost sighting - the spirit who simply appears and repeats the same actions before vanishing. One who never interacts, or seems aware of, anyone viewing it.

Chapter Two - “Invasions of the Angry Dead” - focuses on the malevolent species of apparition. From the returning dead baby spirit, which every ancient culture seems to have created a version, those who return to deal with their mother who let them die. To the vengeful spirit and barrow wight, an evil man whose chaotic spirit is strengthened by death and wreaks havoc. Then moves onto the standard house hauntings of the poltergeists and screaming skulls- the former occupants of a dwelling who refuse to move out, even after death.

Chapter 3 - “Shadow Plays of Grief and Pain” reveals the haunted battlefields across the world. Areas where the dead rise to slaughter each other over and over again. Those where the body count was so high, Death had to leave a few behind because his wagon was full. The action shifts to the classic of all ghost motifs, the haunted house. It actually begins with haunted castles, before moving onto modern homes.

Chapter 4 - “Hands Across the Void” - dwells on stories of how peoples in the past kept the dead from rising. Odd burial habits, such as taking the body to the grave feet first, so they couldn’t walk back. This goes hand-in-hand with tales of how people - priests and the like- put the dead back to rest once they rose again. A daunting and dangerous job.