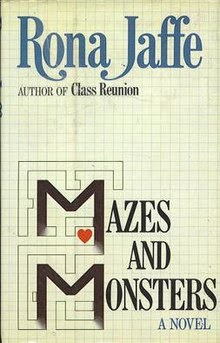 
“The days dragged by. The police were still looking in the caverns and questioning students. The Pequod newspaper picked up the story of the missing student, and of course The Grant Gazette did, and then the wire services got hold of it. Suddenly the press aws fascinated by the game. The idea that a game was supposed to be a fantasy could have taken on such reality as to cause the disappearance - and possible death- of a player was thrilling. Sales of mazes and Monsters soared. It was inevitable that someone would finally advance the theory that the game had caused Robbie to flip out. But it was all conjecture. The fact that Robbie had been so normal: an athlete, good grades, popular, friendly pleasant, attractive, made the story even more intriguing to the press. It seemed as if reporters were interviewing everyone on campus.”


This, of course, is the infamous supposed anti-RPG novel where college students playing a Dungeons and Dragons like game get too involved in the fantasy and one of them loses touch with reality. He adopts the persona of his character and drifts off looking for adventure, eventually stabbing a guy who mistakes him for a male prostitute.


This came out just after the popularity of Dungeons and Dragons boomed in the late 1970s, and was based on an actual event where some college students got lost playing the game in some steam tunnels beneath their university. They essentially were the first LARPers. With typical journalistic zeal for exploitation, the story was seized upon and D&D was eventually roped in with the Satanic Panic which was beginning to pick up steam. The “activist” group B.A.D.D. (Bothered About Dungeons & Dragons) praised the novel and a cheap CBS Movie of the Week was produced starring a young Tom Hanks in one of his first roles. The entire film is embedded below. For bad films aficionados only.


I did research on the literature of the Satanic Panic for my upcoming novel, but I didn’t not include this book among them, due to the fact that this is listed as a work of fiction, while all of the others, Michelle Remembers, Turmoil in the Toybox, etc, claim to be real. Strange as this may sound out of all of them, Mazes and Monsters is the most grounded, down-to-earth, book of them all. The so-called “real” material spins off into ridiculous claims which no critical thinking person could believe. 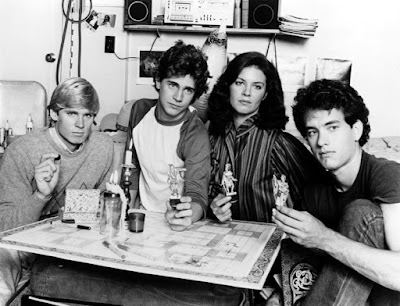 In fact, one of the novel’s drawbacks it’s that it’s too real. So real that it’s actually kind of boring. We see the four protagonists with their various social dramas and brief romances and various backgrounds, most of which feels like padding. This book was published in 1980 so the stereotypical image of the social leper gamer had not been established. Back at that time, everyone was trying D&D, but most stopped after college. The action, such as it is, is crammed in the last forty pages and even that is thin. It’s mostly about people about to graduate college, worrying about their life and future. Almost a college version of The Breakfast Club or the gamer version of Diner.


Despite most of the fervent criticism against Mazes and Monsters by gamers over the last few decades, it doesn’t paint all gamers as mentally unstable loners. In fact, the book doesn’t really discusses the game much at all. It’s always present in the background, but there are entire chapters where it isn’t mentioned. Three of the four protagonists have no problem playing the game and find it a fun distraction, and the kid who does flip out is already shown to have a terrible home life and previous mental issues. The movie below did take things to more of an extreme in its depiction of the game and its “effects”. The reasons the one character does lapse into his character are pretty dubious. I don’t buy it, and it almost comes out of nowhere.


Essentially though, this novel is a character study of some mild and slightly troubled characters in a story in which almost nothing happens. A pretty boring piece of work.
For more readings, try books by Rex Hurst.