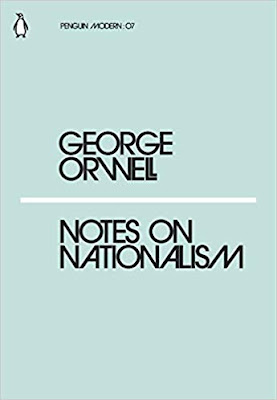 
“By ‘nationalism’ I mean first of all the habit of assuming that human beings can be classified like insects and that whole blocks of millions or tens of millions can be confidently labeled as ‘good’ or ‘bad’. But secondly - and this is much more important - I mean the habit of identifying oneself with a single nation or other unit, placing it beyond good and evil and recognizing no other duties than that of advancing its interests. Nationalism is not to be confused with patriotism. Both words are usually used in so vague a way that any definition is liable to be challenged, but one must draw a distinction between them, since two different and even opposing ideas are involved. By patriotism I mean devotion to a particular place and a particular way of life, which one believes to be the best in the world but has no wish to force upon other people. Patriotism is of its nature defensive, both militarily and culturally. Nationalism, on the other hand, is inseparable from the desire for power. The abiding purpose of every nationalist is to secure more power and more prestige, not for himself but for the nation or other unit in which he has chosen to sink his own individuality.”

This is a collection of three essays by George Orwell written in 1945 and published originally in the magazines: Polemic, Contemporary Jewish Record, and Tribune. All of them are additionally collected, along with a host of others, in Orwell’s Collected Essays. The three essays, “Notes on Nationalism”, “Antisemitism in Britain” and “The Sporting Spirit”, have a similar theme.  Each is an analysis of the phenomenon called nationalism.
For the above selection, you can see how Orwell divides nationalism and separates it from patriotism, but he also discusses an aspect of nationalism which I find fascinating and relevant to  American society today. That of negative-nationalism, where a person can have a purely negative attitude towards a society (usually the one they live in) with no positive feelings towards any other culture or country. While slightly different, this attitude is just as destructive as pro-nationalist attitude as a person’s main motivation. The negative-nationalist just wants to destroy anything to do with a society, to erase and condemn it completely. Often this is the prime motivation of various Communist\Socialist parties worming their way into positions of power. 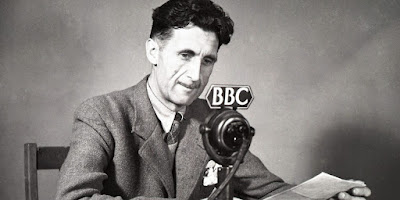 In the second essay, “Antisemitism in Britain”, Orwell discusses how anti-Jewish sentiment has not dissipated in Britain, but due to the Nazi atrocities it isn’t discussed anymore. Many people secretly still dislike the Jews, but would never openly admit it, making “stamping it out” (Orwell’s words) completely impossible if it hidden.


The last article is rather lighthearted and demonstrates the tribal nature that people take to one’s sports team, and how often that team is much more important to people than the politicians about them. He points out people often treat their chosen political party with the same rah-rah-rah mentality that they do their football team. It’s not they're winning. It's we’re winning.