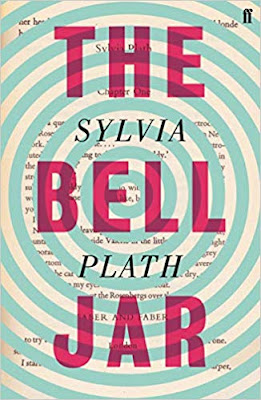 
This is the classic (or near classic, or non-classic-but-everyone-knows-about-it; depending on who you talk to) book by suicidal poet Sylvia Plath. Her only novel in fact, the rest of her energies were devoted to poetry- and decent poems they are. If you haven’t read any of them, give it a try. They are dark and depressing, and reveal a lifelong depression as her primary personality characteristic. But her melancholy is your gain, as some great art was born from that sadness.
The crux of the novel is about a girl who is soon due to mature past the confines of university and enter independent life. A prospect which causes her great consternation, since up until now she has found her greatest success in the narrow confines of academia, doing as she was told and following the lines laid out for her by others. Now on her last hurrah, she is about to enter an unknown arena where all of the grants and scholarships and what-have-you mean almost nothing. Several factors add into her eventual need for her suicide attempt and incarceration into an asylum, which are events that dominate the second half of the book.
The parallels between this novel and Catcher in the Rye are obvious. Two young people on the cusp of becoming adults are having difficulty with the transition. Both wish to remain safe in the womb of adolescent society, with the lack of responsibilities that world has, but ultimately neither can, and the protagonist suffers as a result of their resistance. What make the difference for this novel are the obvious autobiographical details in The Bell Jar. So much so apparently that it caused a lot of fractures in the personal lives of the other real life people (very thinly disguised) mentioned in the novel.
Despite all the other claims, The Bell Jar is an obvious symbolic reference to chronic depression and mental illness. Suffering from chronic depression was like having a bell jar over her head. She could see the world, but was separate from it. It was a muted prison, where all that existed were her own thoughts in a suffocating atmosphere. People have made other claims as to symbolism, but none of them are very convincing so I won’t waste anyone time. Plus the author herself stuck her head in an oven six months after The Bell Jar’s UK publication. That, I think, should end any other discussion.
For more readings, try books by Rex Hurst.