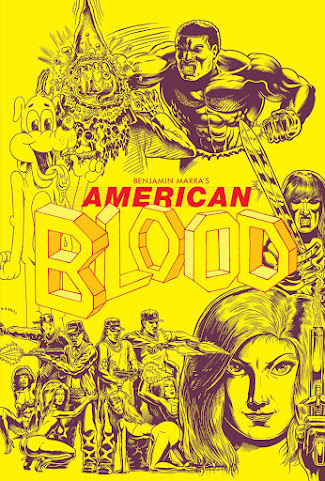 This is a collection of independent comics by indie artist Benjamin Marra. For those who are unaware of his work, buckle up. These are weird, ultra-violent, foul-mouthed pieces of work, and I couldn’t put the book down. I feel as if many of these works have something very profound to say about American society and culture, I just don’t know what the hell it is. Seven stories are encapsulated here, each of varying skill and achievement. Some are well done, others are barely passable. Marra’s art may not be for everyone. Many have said that his style is stiff or amateurish, while that certainly can be seen in these early works, I still had a lot of fun reading this book.

The first tale is that of the Gangsta Rap Posse - which is exactly what you might think- a gangster rap group who, for two issues, run about killing everyone in their path, smoking weed, selling crack, putting women out to be prostitutes, and almost recording an album. It treads the line between parody and insanity so closely, that I can’t tell. Next is the tale of Lincoln Washington a freeman who tries to start a farm in Butchergrass, SC after the Civil War and run afoul of a false rape accusation and the Klan. Violence ensues and our hero rips a few people in half. Next is Maureen Dowd, an investigative reporter, whom every man wants, looking into the Bush Jr. administration, while navigating a date with George Clooney. Ultra-violence ensues. This story proves that nothing goes staler faster than political humor or comment. Ten years ago, this was cutting edge. Now it’s old hat and ancient history. 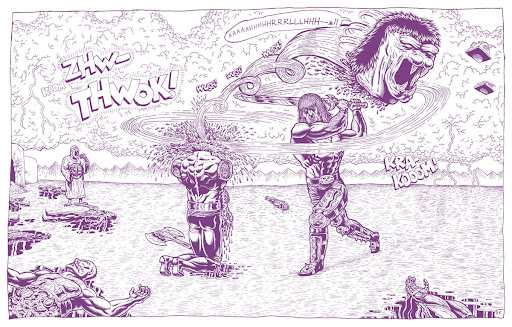 Ripper and Friends is a funny animal story with lots of shitting, pissing, drugs, sex, and violence. It reminds me most of the underground comix from the 1960s with its attempt to take what looks like kid’s fare and sexualize it. But again, I’ve seen it done better and becomes a little tedious after about ten pages. Zorion: The Sword Lord is perhaps the oddest one in style. First, it looks like I used to draw in the margins of my high school notebook, and then periodically the art gets worse and worse until it’s almost a doodle, as if the artist was rushing to get it done. This is not to say it isn’t fun, but it’s definitely indie fare. Essentially Zorion is a futuristic barbarian type who kills everything and has sex with all the women. Again, parody or insanity? You be the judge.

The last two has some of the best art in the book, and may take place in the same universe as Zorion, but who knows? The Naked Heroes are a duo of interdimensional singers who get trapped up in a dimension where all the powers-that-be want to capture them and steal their souls. They solve the problem by shooting everyone. Blades and Lazers are a pair of bi-racial “Galacto-Demon Hunters” hired to destroy a massive demon which they do with blades and lasers. Not much to be said about these two, except you know it will be violent. 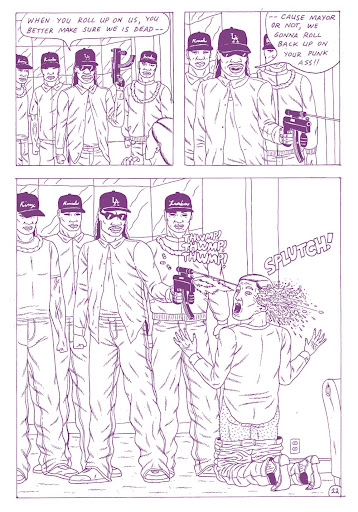