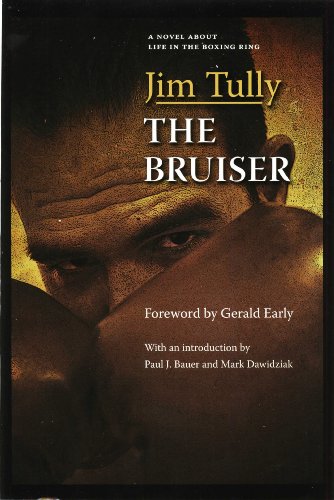 “A battalion of huge, black and white clouds moved slowly up from the west and completely obscured the blazing sun for a moment. It burned through them, more appallingly hot than ever. A sprinkle of rain, not dried by the blazing sun, fell over the audience of a hundred and fifty thousand.

“A box containing the new gloves was brought into the ring. The bandages were adjusted.

“Managers and chief seconds handed them from one to the other. Sully’s second took a pair and twisted them about, then stopped to wipe his face with a handkerchief. He quickly put the piece of linen in the neck of his collarless jersey shirt, and jammed his right hand into the glove. Taking his hand out and twisting the glove again, he fitted it on Sully’s outstretched paw.”

Jim Tully, along with Dashiell Hammet, was the creator of the hard-boiled style of American writing. This style was later picked up and refined by Ernest Hemingway, H. L. Mencken, and Raymond Chandler, but Tully stands out from all these others. They simply wrote in the style. He lived it. The introduction describes him as the biggest longshot in American literature. Growing up poor, abandoned by his family to an orphanage, Tully spent much time tramping about as a bum, a circus hand, and -for a short time - a boxer.

Originally published in 1936, The Bruiser may have been one of Tully’s more successful novels - at least successful enough to be reprinted several times over the next few decades. Though his true success seems to come from his autobiographical works, The Bruiser was the exception to the rule. If there is one flaw, which many modern readers have pointed out, is the uneven flow of the narrative. It is choppy, like a rough cut piece of ice, and sometimes jolting as the action jerks the reader into an area, brings up a plot point, and then resolves it behind the scenes.

Tully wanted this to be as realistic a picture of boxing life as is possible, hence the irregular action. And I must admit he succeeded. It is a very knowledgeable look at boxing, complete with punchy old boxers, sleazy rip-off managers, and the general corruption which has been always associated with the sport. This is all wrapped around the traditional story of a young man going up the ranks of his chosen sport, and wondering if it is with all the trouble.