The Book of Beginnings (The Enchanted World) 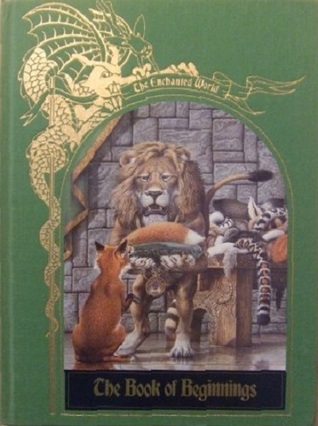 by the Editors of Time-life Books (Author)

“In the lands far to the north, in the lost ages when it seemed that the night lasted all winter long, the storytellers would gather around roaring fires to sing away the darkness. Old women, whirling distaffs, told of life as it used to be in the days of their grandmothers’ grandmothers. The healers and shamans, their fingers stained with the juices of potent herbs using in their mysterious work, recounted great deeds and sorrows from the morning of their race. As they passed round the beaker of mead, each bard would take it in turn to sing or speak an old story.”

An amazing look at origins stories from around the world. This book sets itself apart from many of its ilk, simply by incorporating so many cultures under this banner and then demonstrating the similarity between them all. Like Joyce’s term, the monomyth, this book strives to show the similarity between all forms of tales, yet still retain a sense of cultural identity. I was quite happy to see more than just a look at Norse and Greek myths - they are included, but not more represented than any other culture. Thus this book contains many myths of which I hadn’t read before.

Chapter One - “Out of Chaos” focuses on those stories which - if you can’t guess - deal with the creation of the world. Most of the tales have the same elements, an area of chaos is tamed by the will of a shaper deity; water is somehow fundamental to the beginning of life, and well as the monsters of the world being tamed by the Gods for mankind to exist. Chapter Two - “Celestial Lore” - deals with the various legends surrounding the creation of the firmament - the moon, the stars, and the sun. Unlike the previous chapter, there are incredible differences from story to story. Very imaginative material here, ripe for the plucking. Chapter Three - “The Dance of Life” - handles the creation stories that detail how a specific animal or plant was created. How the animals got their tails, how the violet was created, how frogs were born, etc. These are a little more predictable, as each creature is usually created by some pissed off deity.