As you may or may not know, this graphic novel - the original series - was made into a film starring Bruce Willis in 2009. While the book and film begin similarly enough, they alter course pretty quickly after the first two surrogates are electrocuted. People are living their lives remotely from the safety of their own homes via robotic surrogates - mechanical representations of themselves. It's an ideal world where crime, pain, fear and consequences don't exist. But most of the population is shut away in homes. We see all sorts here – people gender swapping, alteration of physicality, and even insane activist groups hell-bent on destroying the surrogate population.

The plot flows at an even pace. Sci-fi noir, police detection mixed with science fiction elements, being the key. We are balanced with the main character abandoning his own surrogate in order to catch a madman with a plan to plunge the entire city, 92% of which are people who have given their lives over to living via robot, into darkness. This is juxtaposed against the protagonist's own personal life. His wife is a person who cannot conceive of a life without her surrogate.

Various additional news reports and histories and articles from fictional sources are included after each chapter. These real help build a fascinating world where everything is run via remote and all risks to the individual are eliminated. It is as if every person is in a panic room and working, afraid to come out. The one thing the book didn’t address was that this inevitably would result in a population decrease of catastrophic proportions. The next generation of children would be a fraction of the normal amount, if everyone only used robots as sexual surrogates. Besides this point, an excellent story overall in art and plot. 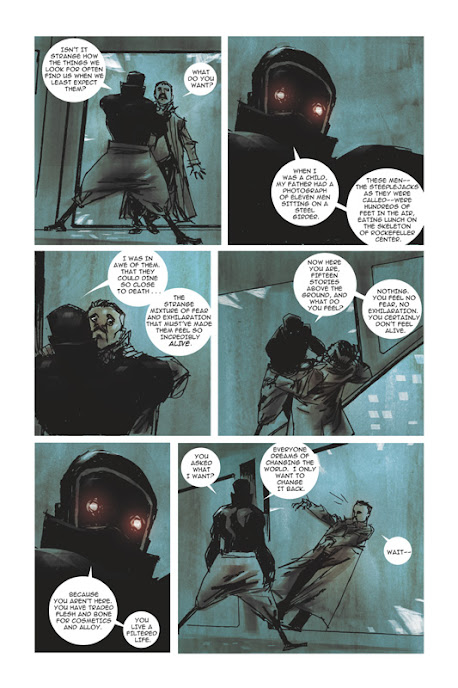