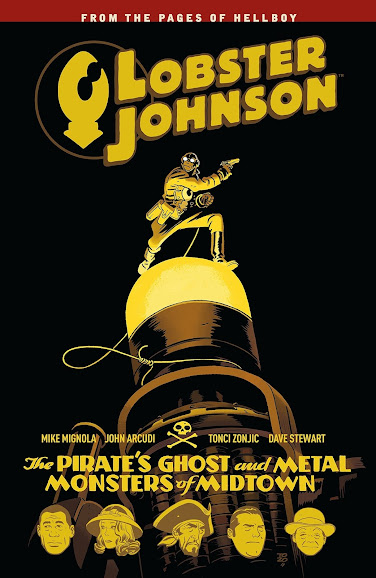 For those who are unaware, Lobster Johnson is a spin-off character from the Hellboy universe. He is first mentioned as a throwaway character in Wake the Devil and actually appears for the first time in The Conqueror Worm as a ghost who helps Hellboy defeat brain-in-a-bottle Herman von Klempt and the Ogdru Jahad. In this series, set in the 1930s, he resembles the type of pulp masked vigilante common for the era such as The Clown or The Shadow. He is known simply as the Lobster, due to his habit of branding his kills with a lobster claw shaped burn. It wasn’t until after his death that his alter-ego was uncovered and became known as Lobster Johnson. Two three-issue arcs are collected here.

The first arc is “Metal Monsters of Midtown” and demonstrates that the best part of these Hellboy spin-offs is when they reuse or expand upon a part of the Hellboy Universe already uncovered in a previous volume. In this case, three men from Zinco industries run across a cache of Hyborian technology, high up in the middle of nowhere - as they tended to be. They create giant metal robots operated by remote mental control from the technology, but find themselves addicted to the experience. Lobster Johnson and crew take it upon themselves to take these destructive devices down.

The second arc “The Pirate's Ghost” is not as good as the first, and is a sequel to “Get the Lobster” a ghostly pirate ship appears on the Hudson River, and the Lobster’s hunt for a major mob boss may have something to do with it. Old villains pop up, the female character is kidnapped and it becomes the object of a hunt. Very over-the-top and the plan doesn’t really make much sense, but the action is fun. 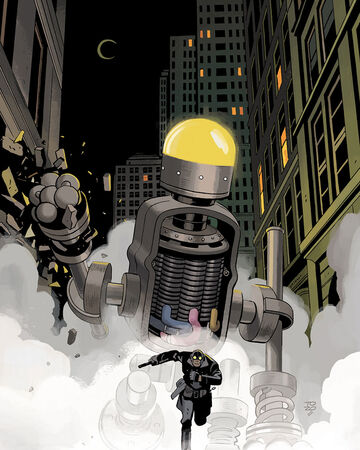