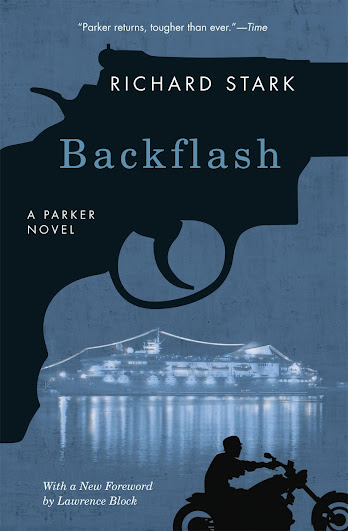 “You don’t meet where you’re going to pull the job, nowhere near it. And you don’t meet anywhere that you’ve got a base or a drop or a contact or a home. Three days ago, just after his conversation with Claire, Parker had started making phone calls, and when he made contact with the two guys he wanted he did a minimum of small talk and then said the same thing both times: “I ran into Edward Lynch the other day. Remember him?” Both guys said yeah, they remembered Edward Lynch, what’s he doing these days? “Salesman travels all over the country. Said he was going to Denver, meet Bill Brown, there on Thursday, then on and on, travel every which way. I’d hate that life.” Both guys agreed that Edward Lynch sure had it tough these days, and they did a little more nonsense talk, and hung up, and now it was Thursday and now Parker was here as Edward Lynch, and he had the two messages in his pocket.”

This is the second book in the revival for the Parker series. Originally written as a recurring criminal character in a series of heist novels set in the 1960s, the anti-hero was revived for seven volumes from 1997 - 2006 by Mysterious Press, with an eight coming out in 2008 by Grand Central Publications - making a total of 24 Parker books.

Essentially there are two types of stories in this series, ones where the criminals plan a job, execute it and things don’t go according to plan; while the other occurs usually after the plan has happened and Parker has to deal with the aftermath of the job. Backflash manages to combine both of these elements together in a single story.

The book begins with a job gone sideways, where Parker is the only one to walk away with the loot, this leads him to his next job - while those looking for the money from the first job are hot on his tail. The main action of the Backflash revolves around the robbing of a casino riverboat in New York - legalized gambling in many states being a hot topic when this book came out. The bulk of the text revolves around the planning and execution of the heist - which is the best part of the book and worth reading. After which things go wrong, because something always has to go wrong in a heist story. Backflash is a decent heist novel and a good entry into the Parker series, but isn’t groundbreaking in any way. If you’re just looking for a solid crime story, this is it.