Star-Lord: Guardian of the Galaxy 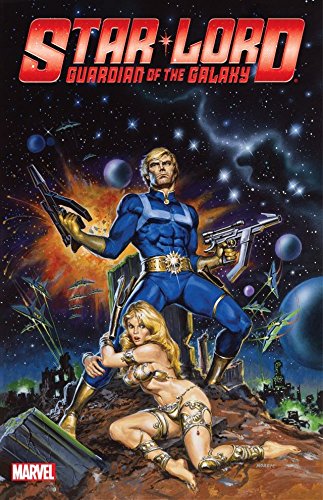 “I conceived something very large. My hero would go from being an unpleasant, introverted jerk to the most cosmic being in the universe, and I would tie it into my then-new interest in astrology. After his earthbound beginning, his mind would be opened step by step, with a fast-action story on Mercury, a love story on Venus, a war story on Mars, and so on out to the edge of the solar system, and then beyond. But—after his earthbound beginning, where I established him as an unpleasant, introverted jerk, I left Marvel, so no one ever saw what he was to become” Steven Engleheart, co-creator of Star Lord.

Many people won’t know the character Star Lord outside of the two Guardians of the Galaxy films, and I must admit to being one of them. He was a minor character for most of my time collecting comics from the Marvel Universe. From what I can tell from these early issues of the magazine Marvel Preview he really wasn’t meant to be. It was an attempt by the company to tap into the rapidly expanding science fiction market. As such none of the stories here reference any other part of the Marvel Universe and are pretty straight forward science fiction fare, with an extremely powerful protagonist who has a living ship and other advanced gadgets at his command. Most were written in the ‘70s  - except for the mini-series from 1997 at the end of the book - and the writing reflects that time period. After these appearances, the character disappeared until the 2004 Annihilation event where he finally becomes part of the 616 standard Marvel Universe.

Written by a young Chris Claremont, pre-X-Men days, what really stands out here is the amazing artwork. Perhaps the only thing which is memorable about the character is the amazing array of artists who worked on his title. John Bryne, Bernie Wrightson, Bill Sienkiewicz, Gene Colan, Carmine Infantino, along with a host of others. The authorial duties were taken over by Doug Moench for a few issues of Marvel Spotlight.  These are the best Star Lord stories in the book.

For more readings, try books by Rex Hurst
Posted by RexHurst at 11:43 AM