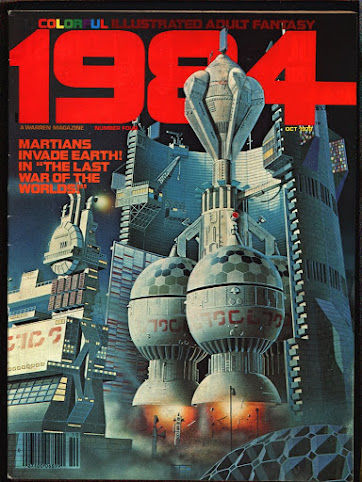 This is the last issue based I bought of the old “illustrated adult fantasy magazine” 1984 put out by Warren Publishing back in the late 1970s to the mid 1980s. I managed to find the first four relatively cheaply - albeit they arrived a bit musty - on eBay, but when I look at the prices for more of them, they certainly aren’t cheap. Granted, each issue is a fill 80 to 90 pages of material - just below standard for a graphic novel - so they price might be justified. But I plan to take a break from them for a while.

Issue four of this magazine contains a story which is rumored to have caused the downfall (ie bankruptcy) of Warren Publishing. The story is called “Mondo Megillah”, the third in the issue. Editor DuBey decided to adapt some classic sci-fi stories for the magazine. One writer suggested “A Boy and His Dog” by Harlen Ellison and DuBey agreed without contacting Ellison. When Ellison refused to grant permission, Dubay had an artist draw the story anyway, then provided the art to the writer to use as the basis for a new story. Ellison then sued for plagiarism and won - easily won. For if you ever read the story, you’ll see there’s no doubt the story was a rip-off, despite the gender swap of the main character. It’s said that this lawsuit drained the coffers of Warren so much, that when the market took a slight downturn, they couldn’t survive.

In this issue we are presented with the stories of “The Last War of the Worlds” which is a sequel to H. G. Wells’ War of the Worlds. Essentially it is a miniature version of the great sci-fi graphic novel Scarlet Traces - albeit this story came out first. Next is the continuing story of Idi Amin, in “Idi and Me”. Where a former dirty tricks agent, named Dogmeat, and a gender-swapped Idi Amin must travel through a new world filled with devolved human mutants. Again my suspicions was that the art for this piece was initially written for an entirely different story altogether. 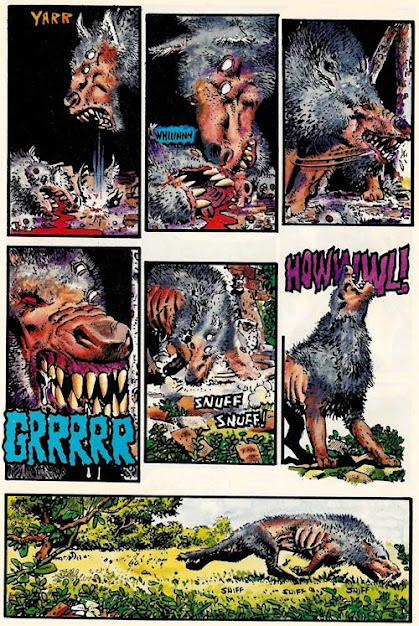 After the infamous “Mondo Megillah”, was the latest installment of Mutant World, by Jan Strnad and Richard Corben. This feature’s dimwitted character continues on his post-apocalyptic journey for food and love - with tragic results. Fifth is “The Stunning Downfall of Muhammad Reptillicus” which is a contiunation of the Sally Starslammer story from last issue. Here Sally becomes involved in the fight business, only to find it’s rigged - shocking but true. After this is another full-color entry by Richard Corben, called “Ogre”. An orge in a fantasy setting lusts after a beautiful woman. Irony and tragedy are the result. One of the highlights of the book. “Lullaby”, the next story is incredibly messed up. Very sexual, lots of nude drawings, and deals with the aristocracy is a future civilization. Eighth is “Boys Camp” about two people setting up a detention camp for human children at the behest of alien invaders.

Last, we have what will become a recurring character, “Rex Havoc, Asskicker of the Fantastic”. In a similar world to the True Blood series all of the Universal Monster species have come out of the closet and announced themselves to the world. Collectively they are called the Fantastic and are now demanding human rights and the vote, etc. Rex Havoc, a tongue-in-cheek character, and his team attempt to prove the evilness of the fantastic races. 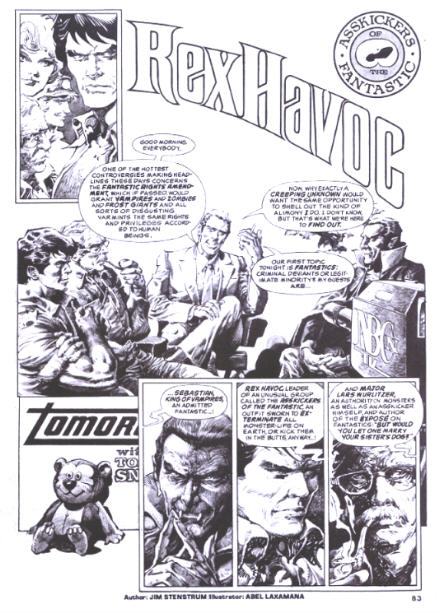