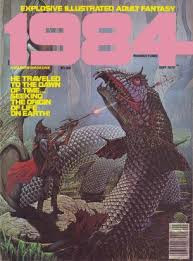 On to issue three of the adult fantasy magazine 1984. This was published by Warren Publishing in the late 1970s to mid- 1980s, where it ended at issue 29 due to the publisher’s bankruptcy. I comment on the last post about how most stories were written by Bill DuBey and as such many of the stories have the same feel to them. Especially when dealing with sexual issues. As it turns out, that is because DuBey had a bad habit of rewriting other people’s dialogue and rearranging artwork without consulting the artist first.

In the first issue, the story by Wallace Wood was cut down, rearranged and totally rewritten to make a very different story. As a result, Wallace Wood refused to ever work with the company again. The Mutant World continuing series in 1984 by Jan Strnad and Richard Corben often struggled with DuBey who would add what Strnad called, ”a spew of juvenile obscenities." This arrogance would ultimately cost the Publisher everything. As we will see next issue.

Despite what I said, this is a great issue of stories, with an amazing cover by Patrick Woddroffe.  DuBey could write fast and quick, and produce quality material - which is perhaps why he was so dismissive of other people’s abilities. Eventually the only writers who stuck around were hungry and just needed a paycheck. One thing which I do miss, that exists in the more popular magazines, are the lack of advertisements. Where is the weird old stuff? The lockets containing dirt from Dracula’s Castle. The creepy masks and ancient paperbacks? Ah well. 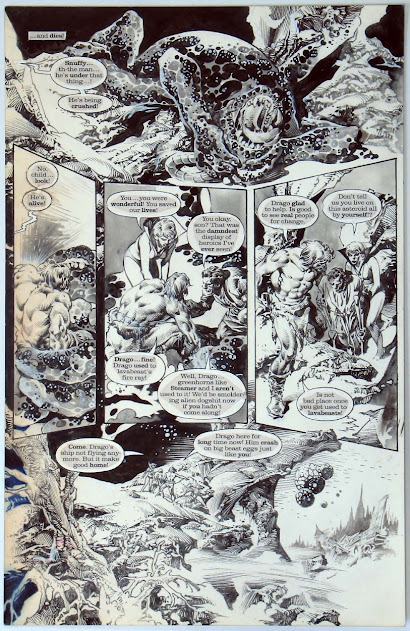 First story, drawn by Jose Ortiz, must have recycled from an old issue of Creepy or Eerie, because I swear I’ve read it before. It’s a weird sci-fi tale about a pair of old telepaths secretly run the world’s military apparatus. Next we have the first in a recurring character, Idi Amin - yes, that one - it’s another truly odd tale, set in the near-future where a character called Dogmeat Jones, part of the America’s Dirty Tricks Squad, causes the African dictator to have a sex change. In retaliation, he unleashes several genetic diseases which wipes out most life and leaves the rest as hate-filled mutants. This is another story which I swear the art was drawn for a different story and DuBey slapped new text onto. Third is, “In the Beginning” where scientists send a group of scientists back in time to observe the very first appearance of microscopic life on Earth, only to be terribly surprised.

Fourth, we have the next installment of Mutant World, which continues to be the highlight of the magazine - partially because it’s a color insert, partially because of Richard Corben’s art. The story itself is simple, but enjoyable. Fifth is, “Bring Me the Head of Omar Barsidian” illustrated by Jim James and Rudy Nebres, one of the more sexual tales in this issue. In it, the titular Omar is chased for escaping from the planet Orgasty, where he as one of the beautiful people he isn’t allowed to quit society. Sixth is a silent feature, illustrated by the mononym Nebot, called “The Strange Adventure of Doctor Jerkyll”. This obvious reference postulates what would happen if the scientist’s potion had turned him female.

Seventh is “Scourge of All Disneyspace”, another bizarre story where men have been mutated so they have no genitals, and a group of renegade women from the insemination factories run across a real penis for the first time. Eighth is ‘COMMFU” - Complete Monumental Military Fuck Up, where a psycho, trained by the government, accidentally initializes a killing spree in Flordia, rather than his intended target. Last is “The Harvest”, a story which caused controversy at the time. In a future world, where there are limited resources, white people hunt blacks for food. The ending splash page was particularly messed up. It depicts a man pulling a fetus from a dead woman and proclaiming to his son, “Your mama was asking for some veal”. Or words to that effect. 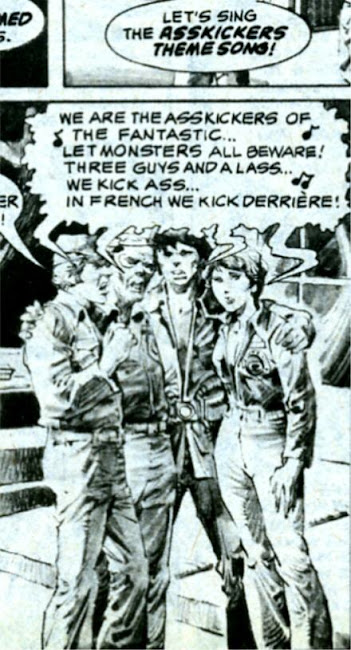