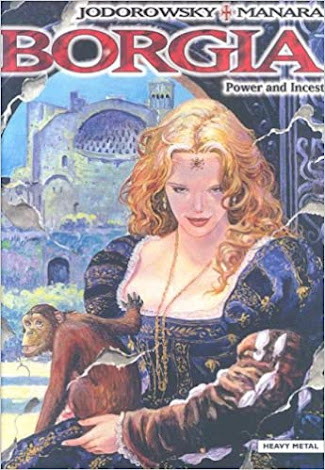 With the insane talents of Alejandro Jodorowsky and Milo Manara what do you expect except tits and ass, sex and brutality, love and murder. What you should not expect however is historical accuracy. While the big things are true, Rodrigo Borgia was Pope Alexander the VI, he had various children -Ceseare, Lucrezia, Gioffre (who may or may not have been a homosexual), and Giovanni - with possibly up to six others. He often married his children off for political gain, as was the custom of European monarchs. Lucrezia was married to Giovanni Sforza, however she was not forced to participate in the sexual act with witnesses until she was married to her second husband, I believe. Anything else in this story is the subject of rumor or has been fabricated for dramatic effect, especially the incest parts. 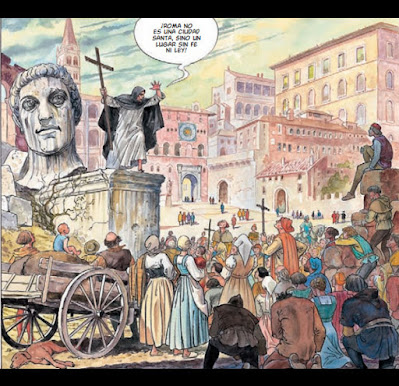 That is not to say this isn’t a good book. If you want a slice of sleazy romance and taboo sex set against the background of Renaissance Italy, when the Roman Catholic Church was at its most decadent, then climb aboard. The art is incredible, the story exploitative, and every woman is a slice of masturbatory heaven. The scenes of old Rome are loving reproduced, sometimes the architecture overwhelms the panel, distracting from the story. While the large panels of people in the streets of Rome is lake that of a Bruegel painting with all of the hidden naughty bits front and center.

This is second in a trilogy and opens just after Rodrigo Borgia has taken power as Supreme Pontiff. To secure the people's love, he fakes a satanic attack on a beloved family and frames a devoted servant for the attack. He then calls all of his illegitimate children to him and arranges for them to be placed in positions of power to cement not only his own power, but the possibility of creating a Borgia dynasty around the position of pope. Much evil is committed in the attempt to make this dream a reality. 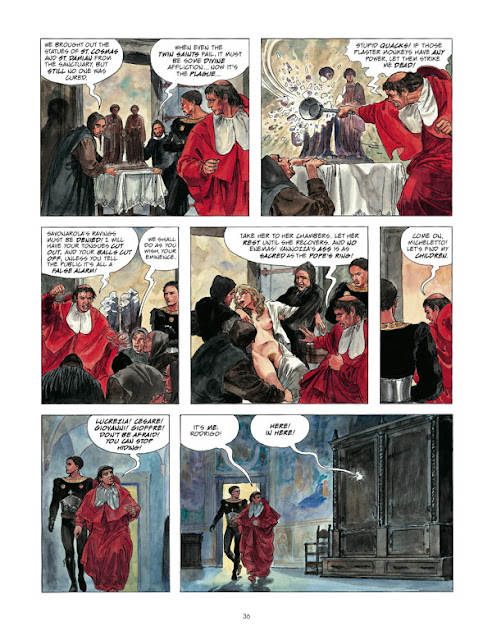