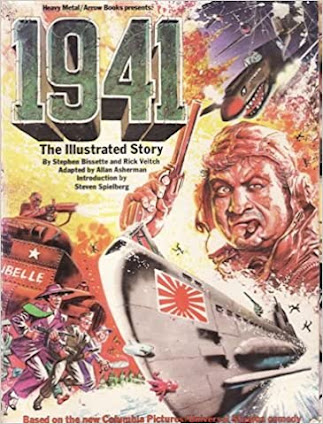 “Rigid criteria were used in selecting the cast and crew for a project of this bulk. And I am proud to say that not one person who worked on this picture has a high school diploma. The cast was selected on the basis of good looks, bad taste, and low moral character... having made Jaws and Close Encounters people asked me, “when are you going to make an intimate personal film that shows who the real Steven Spielburg is?” Well, 1941 is my most intimate film - the statement I’ve always wanted to make.”

This is an illustrated book based on the script for a failed film. 1941 came out in 1979, directed by Steven Spielberg, starring Dan Akroyd, John Belushi, John Candy, Christopher Lee, Tishiro Mifune, Warren Oates, Robert Stack, Treat Williams, Tim Matheson, and so on. A substantial cast. It was touted everywhere. Huge publicity for the film was splashed across TV and print. Belushi and Matheson was straight off of Animal House, while Spielberg just landed two major hits with Jaws and Close Encounters of the Third Kind. It could not fail. Until it did. A bomb. A major bomb. It was gone within a week from theaters, and nearly dropped out of the American zeitgeist, except as a trivia question.

Somewhere in that can’t fail category, Heavy Metal Magazine, still in a nascent form, bought the rights to make a graphic novel of the film. At the time, a novelization of a film was commonplace, but a graphic novel was completely new. There was a spat of time in the 1970s when they would do a picture book of a film made from the film stills, but that was rare. This was a great new idea. If only they had picked a different film to start with. 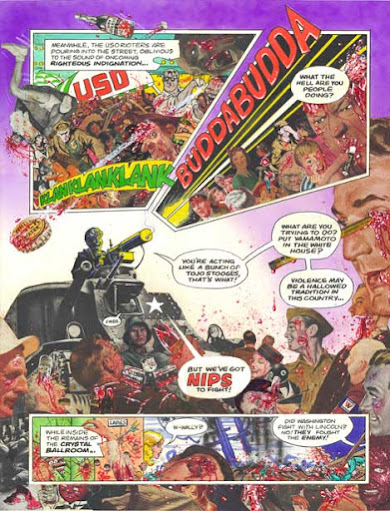 The book is essentially like the film. Two horndogs try to get laid. Meanwhile hysteria grips California in the wake of the bombing of Pearl Harbor. An assorted group of defenders attempt to make the coast defensible against an imagined Japanese invasion - which eventually turns out to be true. Comedy ensues. What sets this book apart is that the graphic novel is actually way better than the film. The combined efforts of Stephen Bissette and Rick Veitch elevated a raunchy comedy into a work of art. Stylistically it reminds me of old Heavy Metal, with insane backgrounds, reused old animations, and sometimes photos of the actual actors in their parts. Granted this was produced as the film was being made, so it looks different from the finished product, which is just as well. The film is a dud. This is a work of art.

If you are interested, avoid going to Amazon, where the price gougers are out in force. I looked at a few prices ranging from $155 to $650. The link above is to the Heavy Metal website, where copies are being sold for $3 apiece. I suppose these gougers justified their prices by claiming it's a rare item. That’s because no one wanted to buy a copy, due to its terrible source material. But apparently it’s not so rare. Most of the copies are still filling up a warehouse owned by Heavy Metal Magazine. Funny, I expected them to be buried in a landfill next to all those copies of E.T. for the Atari 2600. 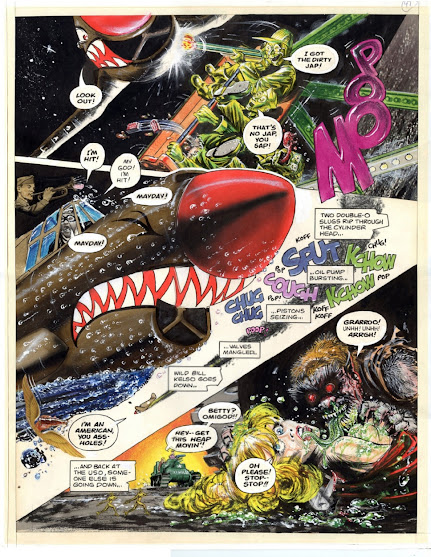