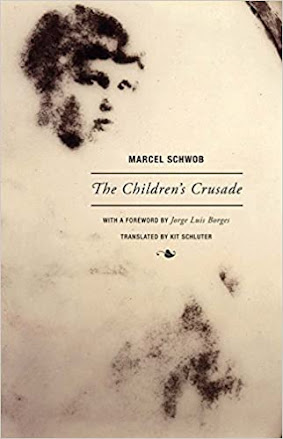 “Hear now the disposition of these children. They were dressed in white, and wore woven crosses on their clothes. They appeared to have no idea where they were, and did not seem distressed. They trained their eyes constantly on the distance. I noticed one among them that was blind, and that a little girl held him by the hand. Many have red hair and green eyes. Those ones are Franks who belong to the emperor of Rome.”

If you are unaware of the facts or legends behind the historic Children’s Crusade from around the 13 century, then you will probably not enjoy nor understand what is happening in this collection of short stories. An assumption is made by the author, that reader is educated on the subject, or has a basic working knowledge. Failing that, the very short stories - almost flash fiction- will be half gibberish or half obscure in context. That isn’t to say that stories by Marcel Schwob aren’t beautifully written and translated for they are. I simply found that refreshing my knowledge on this event added to my enjoyment of the book.

The traditional story is probably cobbled together from factual and legendary events. It begins with either a French or German boy having visions telling him to go to Jerusalem and peacefully convert Muslims in the Holy Land to Christianity. This started a popular movement of children heading to the Holy Land. Many children were tricked by merchants and sailed over to what they thought were the holy lands but, in reality, were slave markets. There seems to have been two such movements. One in Germany where around 7,000 people followed a fifteen year old shepherd. The second was in France where another shepherd, around 12 this time, collected a following of some 30,000 people to follow him. Both movements, as we know, ended in disaster.

This beautifully prose is written from the points of view of eight different characters commenting on various points in the Crusade’s journey. They are beautiful, majestically written, with prose that falls off the page and seeps into your soul. I’m kicking myself for not reading more of Schwob’s work earlier. Highly recommended to one of all, both for historical context and artistic endeavor.