Maggie: A Girl of the Streets (Drama) 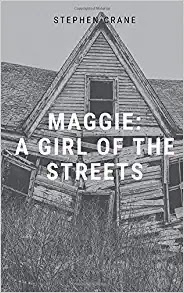 “The vast crowd had an air throughout of having just quitted labor. Men with calloused hands and attired in garments that showed the wear of an endless trudge for a living, smoked their pipes contentedly and spent five, ten, or perhaps fifteen cents for beer. There was a mere sprinkling of kid-gloved men who smoked cigars purchased elsewhere. The great body of the crowd was composed of people who showed that all day they strove with their hands. Quiet Germans, with maybe their wives and two or three children, sat listening to the music, with the expressions of happy cows. An occasional party of sailors from a war-ship, their faces pictures of sturdy health, spent the earlier hours of the evening at the small round tables. Very infrequent tipsy men, swollen with the value of their opinions, engaged their companions in earnest and confidential conversation. In the balcony, and here and there below, shone the impassive faces of women. The nationalities of the Bowery beamed upon the stage from all directions.”

This was originally a self-published novella by Stephen Crane from 1893. It flopped, but after his novel, The Red Badge of Courage, hit it big, Maggie was republished - (after significant changes were made) 1896 and became the semi-classic it is today. That is, a great story which no one has ever heard of. An amazing amount of material is covered in such a short span of work. In fact, the life of an entire girl from the Bowery.

For those who don't know the Bowery was a neighborhood in the south of Manhattan, well known for slums, vice, crippling poverty, violence, and crime- at least at the time of this writing. The protagonist grows up in a chaotic situation, surrounded by her violent and dangerously alcoholic family. Her parents routinely become drunk, beat on their children, and destroy their apartment. Attempting to escape this insanity, Maggie latches onto a local bartender, who she perceives as the knight in shining armor, while it is as plain as day to the reader he is nothing more than a dumb thug with a high opinion of himself.

While Crane’s characters speak in the vernacular of their society, similar to Hurston’s Their Eyes Were Watching God and Walker’s The Color Purple, the book discusses underlying themes that pester every level of mankind. Substance abuse and hypocrisy being chief among them - most of the characters here are the dregs of society, thus they are constantly looking for someone else to look down upon, and if a victim doesn’t present himself then they manufacture one. But this novella also takes a large swipe at the naturalistic principle, a topic of much discussion at the time of first publication.

Naturalism is when “a character is set into a world where there is no escape from one's biological heredity. Additionally, the circumstances in which a person finds oneself will dominate one's behavior, depriving the individual of personal responsibility.” In this case, Maggie, both sheltered from any other life and abused by current situations, cannot get away from the lousy hand dealt her and must suffer accordingly.