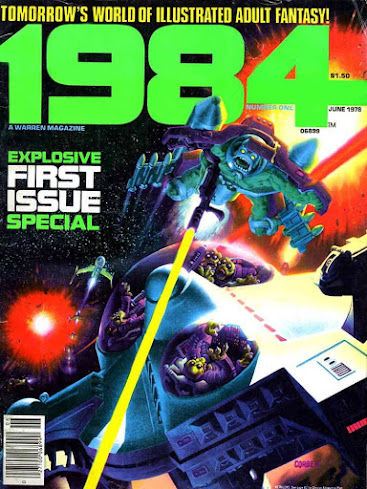 This is the premiere issue of Warren Publication's attempt at a science fiction illustrated magazine, even though it is billed as “Tomorrow's World of Illustrated Adult Fantasy”, the stories (in this issue at least) are billed are all science fiction. 1984 is, of course, a reference to the classic dystopian novel of the same name, written in 1948. It was designed to compete with Heavy Metal so much of the material has more sex and violence than one would normally expect- even from a Warren publication. The magazine changed its name to 1994 with issue 11, supposedly due to a request from Orwell’s estate. It continued on until issue 29 when the whole of Warren Publications went into bankruptcy.

This wasn’t like the previous title from Warren I covered, The Goblin - in which most of the premiere issue seemed to be made up of leftover crap from the pages of Creepy - the premiere of 1984 began with a strong collection of stories by proven masters. Under the helm of Bill DuBay - The Rook. It clocks in at 82 pages, with 10 features and a cover by Richard Corben, well worth the buck fifty asking price. The editorial claims they “wanted to bring back the space adventures of their youth. The Shadow. Buck Rodgers, Flash Gordon.” Well they didn’t quite succeed in this first issue, but made a decent effort. 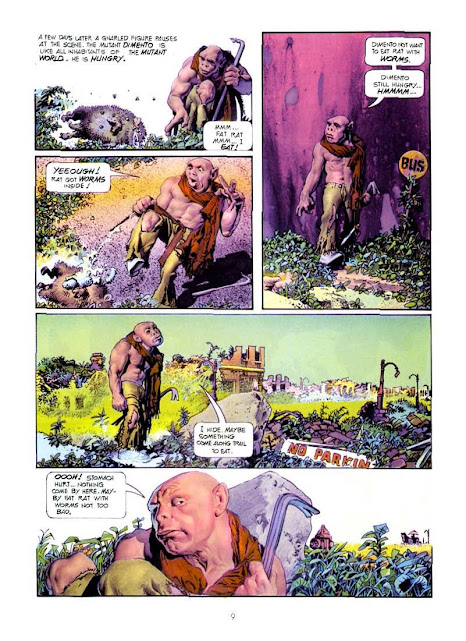 First we have “Last of the Really Great, All-American Joy Juice” written by Bill DuBay and drawn by Jose Ortiz: A tongue in cheek story in the aftermath of a massive war on Earth where nearly every male has been sterilized. Thus a space adventure begins to recover the last of the sperm banks on the planet. A little too silly, but as long as they aren’t all that way, I can take it. Second is “The Saga of Honeydew Melons” by Nicola Cuit and drawn by Esteban Maroto. A weird story about a talent scout having difficulty keeping live entertainment on a planet of miners. He turns to a mechanical solution with disastrous results. Fun story. Third is “Once Upon Clarissa” by Bill Dubay and drawn by Alex Nino. A truly weird love story about a girl being kept alive through the magic of future technology. Its only flaw is that most of the text is written in cursive, and has faded due to the age of my copy - making reading it less enjoyable than it should have been.

Fourth is “Quick Cut” written and drawn by the master Wallace Wood. It’s set in a post-apocalyptic future where humanity has divided into two distinct species and the sexual interplay and violence between the two groups. Rather more brutal than I expected, but I enjoyed it. “The Saga of Xatz and Xotz” no author or illustrator given, is a one-page filler about a couple of aliens landing on a devastated earth. Fifth is “Bugs” by Bill DuBay (surprise, surprise) about an exploratory earth vessel encountering what they think are the ships of an alien race. Sixth is the first installment of a recurring story called Mutant World, written and drawn by Richard Corben. Easily the highlight of the issue, this is the only color story which centers on a rather dim protagonist, Dimento, as he tries to make his way through a mutated Earth.

The last three are: “Faster Than Light” by Jim Stenstrum and illustrated by Luis Bermejo, a comic story about the first faster-than-light cruise ship and the attempt to hijack it. Definitely not hard science fiction. “Angel” by Bill Dubrey and illustrated by Rudy Nebres, this seemed to be an attempt at another recurring character, revolving around a young lady raised by a militant monk society after a nuclear war. It ends with see more Angel next issue, but I don’t think we do. The final tale is “Momma Can You Hear Me” by Nicola Cuti and illustrated by Alex Nino - one of the better stories- about a man who was sold into slavery as a child and mutilated so nearly half of him is cybernetic implants, he comes back to his home planet in search of his missing mother. I would rate this last one as maybe third best. Always go out on a high note. All in all, a decent first issue. 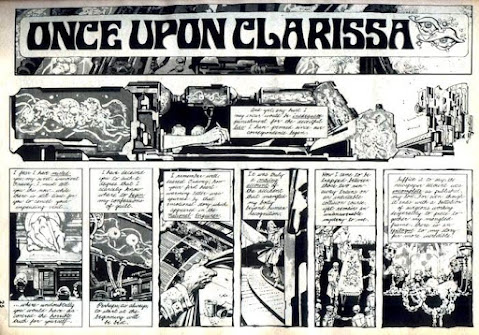