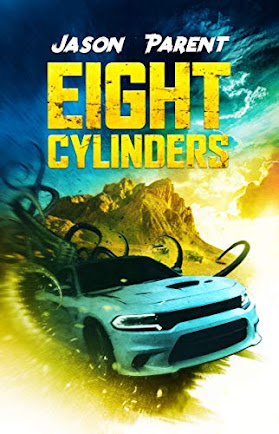 “Instinct made him turn away from the tentacle just as it exploded in an inferno of fire and pudding. With a series of clinks, shrapnel stabbed into his hood and splintered his windshield. A tire once belonging to an ATV, now in pieces, bounced off his hood. He skidded to a halt, ducking as flames leapt through the open window.

“As the air cooled and the smoke cleared, a bodiless tentacle flapped on the road. Slowly, it began to shrivel, withering in a matter of moments much as a corpse would over a decade. After a minute, it stopped moving altogether.”

Eight Cylinders is a novella about a criminal on the outskirts of Las Vegas who, after taking directions from a Magic 8 ball while on the run from enemy gangsters, find himself in a space of desert which seems to not dwell on the planet Earth - but may an adjacent space to it. There he meets a ragtag group of rebels and outcasts, who are stuck in this gateway to Hell. They start to become prey for unseen monsters.

Eight Cylinders is a Mad Max blowout straight from Hell. The action piles on and on, until it reaches a boiling point where an all-or-nothing gambit is their only shot to beat the Devil. A thrill ride from start to finish. It effectively uses Hemminway’s Iceberg Principle to hint at what lurks in the dark, but doesn’t spoon feed every detail to the reader. Leaving the most hideous parts to the reader’s imagination.