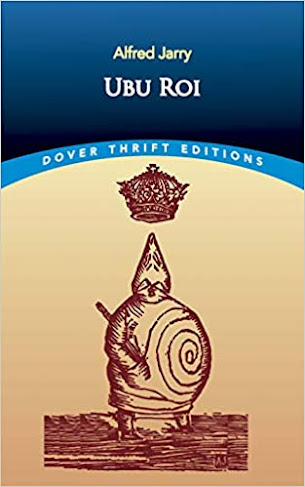 This is  a play which, upon its first performance, caused much outcry, riotous behavior, and walk-outs. Not surprisingly, it ended up closing after that initial night. But the playwright was respected enough, and amused his peers enough, so the infamous play was kept around and referenced from time to time. It is simply dumb luck this occurred. Ubu Roi simply came out at the right time and right place. Had it been produced by any other person at any other time, it would be forgotten, rather than a faded footnote.

The absurdist content and scatological references, which caused all the trouble, are extremely tame by today’s standards. I’m sure there are plenty of people who, upon reading this play, wonder what the fuss was about. Remember however that this play came out in 1896, long before the surrealists, dadists, theater of the absurd, or even theater of the cruel were conceived. And in a very real sense Ubu Roi with its ridiculously evil characters, yet effective parody of the world, anticipates all of these movements.

This version translates the title as King Turd. However, the word "Ubu" is really simply a babble word evolved from the French pronunciation of the name "Hebert”. The language of the play is a unique mix of slang code-words, puns and near-gutter vocabulary, set to strange speech patternsAs the play begins, Ubu's wife convinces him to lead a revolution, and kills the King of Poland and most of the royal family. The King's son, Bougrelas, and the Queen escape, but the latter later dies. Ubu, now King, begins heavily taxing the people and killing the nobles for their wealth. Ubu's henchman is thrown into prison; who then escapes to Russia, where he has the Tsar declare war on Ubu.

As Ubu heads out to confront the invading Russians, his wife tries to steal the money and treasures in the palace. She is driven out by a popular revolt of Poles. She runs away to her husband, Ubu, who has, in the meantime, been defeated by the Russians, been abandoned by his followers, and been attacked by a bear. Ubu's wife pretends to be the angel Gabriel, in order to try to scare Ubu into forgiving her for her attempt to steal from him. They fight, and she is rescued by the entrance of Bougrelas, who is after Ubu. He knocks down the attackers with the body of the dead bear, after which he and his wife flee to France.

Email ThisBlogThis!Share to TwitterShare to FacebookShare to Pinterest
Labels: Humor