An Artist in Treason: The Extraordinary Double Life of General James Wilkinson (History) 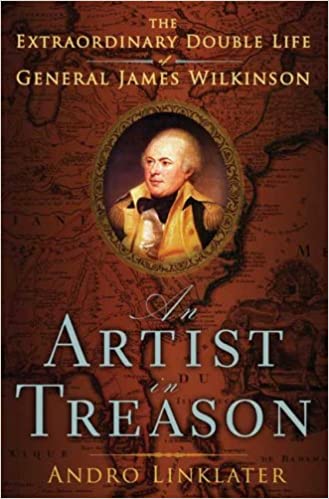 “For his part, Wilkinson, who never remained faithful to any other superior, was always Jefferson’s man. He gave him the army’s loyalty, Burr’s conspiracy, Louisiana’s border. Long after he had damned every other statesman to perdition, he attempted to win Jefferson’s constantly withheld friendship. And the crux of his life proved to be the moment when he sacrificed a career of treachery to be steadfast not just to his nation but to his president.”

Name one Revolutionary War hero who essentially betrayed everything for money whose name wasn't Benedict Arnold? Can't, can you? And why not? I have no idea. It wasn't until recently I came across the name James Wilkinson, General of the United States Army under the first four Presidents, and Agent 13 under pay to the Spanish Crown.

It's an interesting look at another side of American history. The same events occur, but the country looks so much more fragile than before. Wilkinson was a pompous, histrionic, arrogant man, but he knew his business. He first became a paid agent for the Spanish government in order to convince various peoples of Kentucky and various other territories to join allegiance to Spain, who still had sizeable holdings in North America at that time.

The gambit failed and Wilkinson spent the rest of his life defending himself - successfully that is. He went up against three official court-martials and six inquiries, always getting away with it. The Presidents put up with him, because he knew how to handle an army and was, usually, victorious. The press eventually branded him a criminal and he published two books to defend himself - the cost of which are most of his savings.

Essentially this is a profile of an arrogant, but capable man, who lived well above his means, who believed in very little beyond his own glorification. A fascinating look at how fragile our country was at its beginnings and easily it could have gone another way.