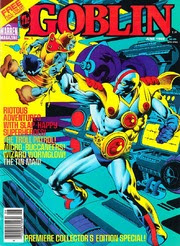 This is the last title attempted by Warren Publishing before they bid that final farewell and departed to wherever publishers go when the ink has run dry. I’m sure most of you are familiar with the publisher through its three successful magazines Creepy, Eerie, and Vampirella. As well as their Famous Monsters of Filmland series and various other movie tie-in one-shot magazines. Plus their two honorable mention attempts: The Rook and 1984. All good things come to an end, and while they ruled the last half of the sixties and all throughout the 1970s (more or less), by the 1980s the well had run dry and here we are: The Goblin.

This was meant to be Warren’s attempt at breaking into the Superhero genre. Marvel and DC exploded in the 80s and Warren’s last gamble was to join in on the cash grab. Why not? Plenty of others were raking it in with direct market sales. So for their attempt at an outing Warren gave us the titular Goblin, a young black man in the gh-etto with the help of an elderly ghost, transforms into the Goblin to fight crime or in this case an mystic spell which transports WWII army troops and aliens. No origin story is given to the character. 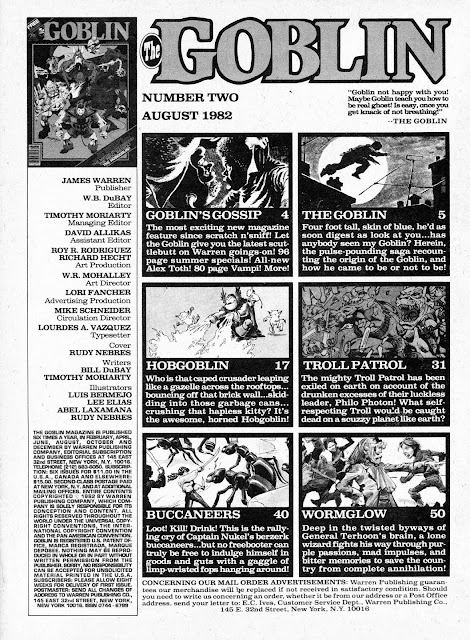 Next is the Tin Man: A robot horde designed by a secret cabal inside of the United States to pretend to be alien invaders, who then threaten both sides of the US-Soviet Cold War conflict. This was meant to save the world from nuclear annihilation. Actually it sounds like a variation on the major plot from the original Watchmen.

Third is the color insert (a novelty for a black and white magazine) for Philo Photon and the Troll Patrol, a science fiction piece heavily riddled with puns and visual humor, but not much drama. It comes across a reject from 2000 AD. A lite version without the ultraviolence to make up for any silliness.

Fourth and fifth are the Micro-Buccaneers and Wormglow. The first is a pirate ship from an alien planet which is the size of …. Something small. The actual size of the ship seems to shift from panel to panel, however their come to earth for plunder and steal a few peanuts. Wormglow is about a wizard who saves the world from another wizard or something. I honestly just rushed through it. The art was great - as it was in all of the stories - but I just couldn’t take another “humorous” story written by someone to show off how “witty” they were.

Most of these were written by legendary writer and animator, Bill DuBay, who created my favorite Warren character The Rook. Unfortunately that style doesn’t come across in these pages. The problem is that these stories don’t know what they want to be. With the exception of Tin Man, all of the characters were written tongue-in-cheek, as if this was meant to be a parody of superheroes, or if this was the swinging 60s had come back and camp was all the rage again. There are too many puns, bad names, and “clever” attempts at humor - but these don’t make a good superhero comic.

Unfortunately, these characters were supposed to be on-going, sustainable one which a reader was supposed to become invested in. But that’s impossible if it's a parody. Like Cerebus, they had to change or die, but they never had the chance to grow. I can tell you that as a young collector at that age, I wanted my comic heroes to seem real and take their jobs seriously. It might have been different had the parody stuck to only one story, but four out of five was simply too much. And honestly, most did not seem like superheroes. They came across as leftover stories from the more successful magazines.