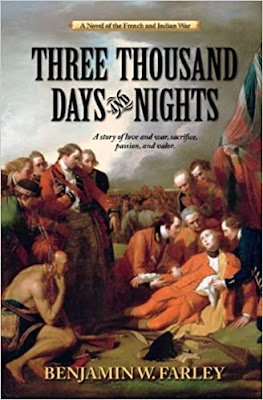 “It was the 11th of May, 1753. All around the dogwoods had unfolded in full bloom, their petals white and centers yellow, crested with beads of red, but Francois was nowhere in sight. Of course, anything might have happened. Turtle Creek ran especially high. Its cold water cascaded blue and white before converging with the Mononghelia. He had selected a site for his camp, protected from the raw winds of the west, hidden from view, yet with a vista towards Ohio. Numerous circles of blackened rock bore witness to the countless travelers who had passed this way.”

Historical fiction can be a mixed bag. You will either love or hate it, depending mostly on what time period it's set in and how much you know about that era. I find the less you know about a historical setting, the more you will enjoy the fiction crafted about it. Otherwise, you’ll be scanning the pages just looking for inaccuracies and anachronisms. Well this story takes place during the French-Indian War some twenty years before our glorious Revolutionary War. In fact the taxation placed on the 13 Colonies by the British Crown were an attempt to recoup the losses faced during the French-Indian affair.

However much as I know about the results of the French-Indian War, I know very little about its specifics, so I enjoyed the book quite a bit. What little I do know is reflected well in the story. While, as far as I can tell, it is historically accurate, it’s pretty obvious that this is the first book published by the author. While primarily an adventure novel with some sizzling romance toss in, you don’t get much of a chance to see the characters or know them, before it all starts. Too many names pop in and too many extraneous details clog the flow of the story. But otherwise it is a fine novel and a fun look into the past.

For more readings, try books by Rex Hurst.
Posted by RexHurst at 10:36 AM