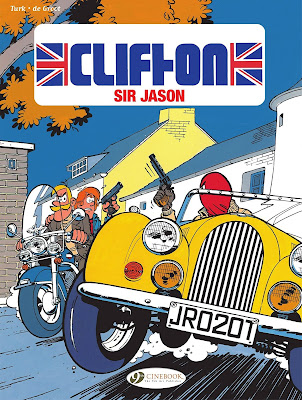 This is a series which was originally published in French in the Tintin magazine. It has been around for close to fifty years, but only a handful of the twenty albums and assorted short stories have been published into English.  The series was created by Raymond Macherot, but by this time it was - the ninth album - the series was being written by Turk and drawn by de Groot. These two handled at least half of the series including this one from 1975. Thus the art style is a little childish, a little silly. And like Tintin, the story is meant for 6th grade readers. I’m sure I would have enjoyed this at a young age.

A British colonel, retired from MI5, though sometimes still active for the British government, Clifton functions as an amateur sleuth who lives in Puddington, near London, supported by housekeeper Miss Partridge, who makes a prize-winning goulash. Clifton drives a red MG TD from the early fifties, which gets mangled in most stories, but is repaired regardless of cost. Clifton's hobbies include Boy Scouting (he's a Boy Scoutmaster Singing Heron), cats, and collecting cigar wraps.

In this story, Clifton is forced to take on and train a new recruit, despite being semi-retired. He soon finds that the man is top on the marks in all the training modules, but when it comes to field work, he becomes paralyzed the moment action starts. Sir Jason comes from a noble house where a certain son is forced into espionage every generation, which is completely against Jason’s wishes. While training, the pair stumble into the usual smuggling operation (ala Tintin). There are attempted murders, chases galore, and a final fist fight. This leads Sir Jason up to make his final decision on whether to remain in the secret service. 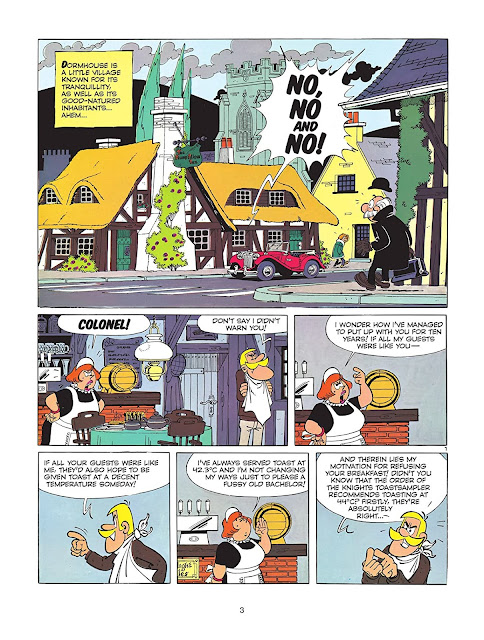