The Unabomber Manifesto: Industrial Society and its Future 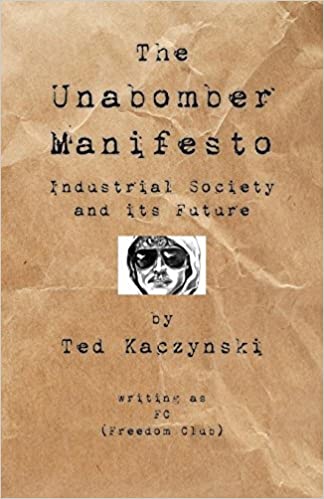 by The Unabomber, Ted Kaczynski (Author)

“Leftists tend to hate anything that has an image of being strong, good and successful. They hate America, they hate Western civilization, they hate white males, they hate rationality. The reasons the leftists give for hating the West clearly do not correspond with their real motives. They SAY they hate the West becuase it is warlike, imperialistic, sexist, ethnocentric, and so forth, but where these same faults appear in socialist countries or in primitive cultures, the leftist finds excuses for them, or at best he GRUDGINGLY admits that they exist; whereas he ENTHUSIASTICALLY points out (and often greatly exaggerates) these faults where they appear in Western civilization. Thus it is clear that these faults are not the leftist’s real motive for hating America and the West because they are strong and successful.”

This is the manifesto of the infamous Unabomber who went on a twenty year bombing spree between 1978 - 1995. He offered to desist from terrorism if various periodicals published this document. They agreed and Kaczynski's, recognizing the style of writing, ratted him out.

Kacynski writes in the third person and under the pseudonym FC (Freedom club) to, presumably, deceived the FBI into believing the manifesto is part of a larger organization and not just one man in a shack pounding away on his manual typewriter.

Now that modern industrialized man has, by sheer routine, dealt with the basics of survival - food, water, shelter - he had become a lesser creature, perverted from his natural purpose. To that end he becomes wrapped up in the power process of modern industrial society- which is A) Identify goal, b) Make effort, C) Achieve goal. This process takes up most of our time, which we also supplement with surrogate activities.

The surrogate activities are one which are set up merely for the sake of having a goal to work towards. These give the person a sense of achievement without actually getting something substantive from the exercise of effort. This is often mostly seen in people’s hobbies, people obsessed with video games, or any sort of collection of non-essential goods.

Freedom is thus naturally suppressed by any industrialized system, since said system needs everyone involved to play their part as a cog. The only freedoms left untouched are the ones which don't matter. Religion, speech, entertainment types don't really matter as long as everyone goes to work the next day.

In the struggle between technology and freedom, technology will always win because we quickly become dependent on that new technology. Freedom will always be taken away under the guise of altruistic means. Ie. for child protections, social justice, national security, etc.. Thus it is impossible to balance technology against the individual. And the answer is to stop trying and dismantle (or escape from) said society.

This is an individualistic call rather than a plan of action for a movement. He is stating his beliefs in form, but seems to have little delusions that his actions will have much of an effect on the greater society. As for what he wanted, as the author himself points out, societies cannot be planned but evolve naturally like species. As such, he states the only escape from the freedom crushing weight of any industrial country is to retreat into a naturalistic state.