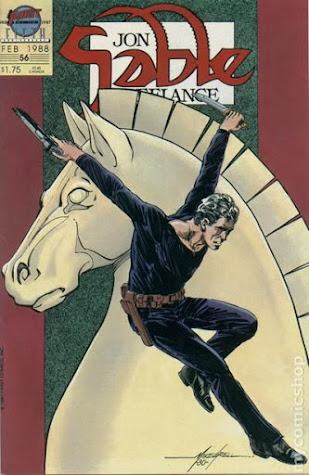 I’ve covered all of the Jon Sable, Freelance comics which were published as trade paperbacks. I don’t know why the series is called the “complete” Jon Sable when they don’t bother to publish the last ten issues. Maybe it’s because the series tends to stall in these issues. Don’t get me wrong, the action is great, the emotions are tense, and the art is tight, but many of the events in these issues have no lasting impact on the character. He is stuck in limbo, when a few issues earlier we were teased with a reckoning between Sable and a master assassin which never comes to fruition.

Maybe Grell just became tired of the whole schmear. This was the end of Jon Sable, Freelance, but not the end of the character. The series restarted under the title Sable with Marv Wolfman (formerly of Marvel comic) at the helm. That series lasted 27 issues before ending. I may or may not be reviewing them in a future post, depending on how much they cost. However, I managed to get each of these for an average of $2.00 each, so it probably will be pretty cost effective. 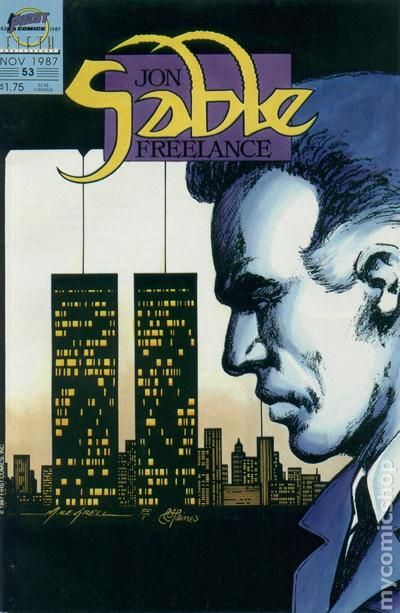 We begin with Sable’s rendition of Die Hard - a must rip-off of the time. In issues 46-47, Gunmen have taken over a Chicago office tower, sealing off the top floors while they hold a group of executives hostage. Unknown to them, one of the hostages is a man intent on killing his boss who had blackmailed the man's wife into an affair. His wife meanwhile, hires Jon Sable to prevent that murder. Now Sable just has to find out how to scale the tower and get inside.

For issues 48-49 we have a sort of swashbuckling, foreign affair. Sable is asked to handle security for a visit by British royalty to a small European duchy. The problem is, there are forces within the country Jon knows nothing about, and since Jon has more than a passing resemblance to the country's ruler, they have their own plans for him.

In landmark issue 50. In which the titular character turns 50 and reunites with Maggie the Cat, a jewel thief who stole an Andrew Wyeth painting from Jon.   It seems she's stolen some jewels from someone high up in the Mafia. Bigger problem is, she also stole his record book. When it is discovered that there's more to the book than meets the eye, Jon comes up with a plan to make sure all of the guilty parties are punished. 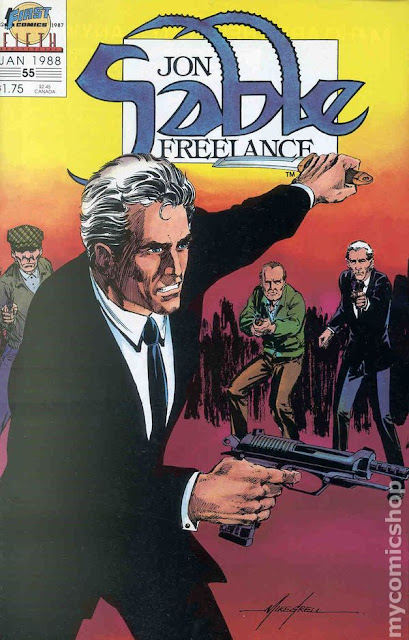 In issues 51 and 52. Jon is forced to babysit his agent’s AWOL son for a day. The pair get mixed up with a prostitute who needs protection from her pimp, against whom she testified, but he was released on bail and is out for revenge. This one mostly reads like a comedy of errors, a lot of missed messages. A story which couldn’t be written today, because we all have cell phones.

Issues 53 is a standalone issue focusing on a frequent frenemy of Sable, Police Captain Winters of the NYPD. Here we see Winter’s backstory and his rise up the ranks of the NYPD, plus his frequent run-ins with Sable, who is always just one step away from jail.

The series concludes with a three part tale, called The Trojan Wars. Issues 54, 55, and 56, takes us on a European mission where the CIA blackmail Sable into investigating an illegal shipment of weapons into Ireland. The guns are supposedly being run by Sable’s estranged father. As we find out, Sable was the bastard son of an officer and a resistance fighter – a one night stand which resulted in a love child. A series of double-crosses, misinformation, and plenty of gunning and running. Enjoy. 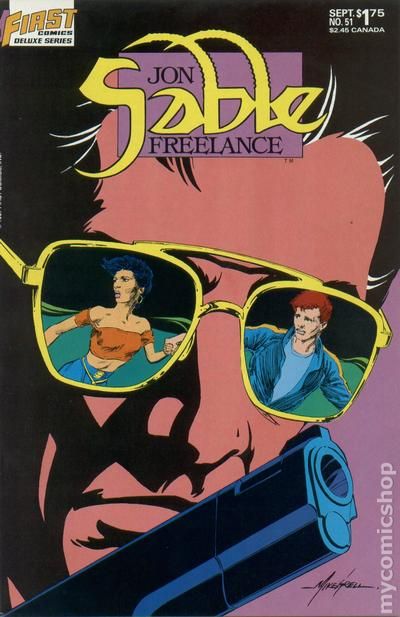